Review: A Night at the Tony’s

Julia Atherley dons black tie and immerses herself in the world of musical theatre. 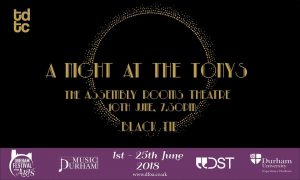 Tone Deaf Theatre Company’s A Night at the Tony’s was a production full of humour, energy, and immense talent. Staged at The Assembly Rooms Theatre, the show saw a performance from Durham Improvised Musical (DIM), followed by show-stopping renditions of Broadway hits from the Tony’s troupe. Directed by Mary Lord, the night showcased the very best in musical theatre talent at Durham.

The night was black tie and started with a drinks reception at Hatfield bar. There were photos on the red carpet outside the theatre. Before even entering the auditorium, the audience felt involved in the show and fully immersed in the concept.

The event was compèred by Rosie Minnitt and Lily Edwards, whose unscripted intervals brought cohesion to the event. Their occasional mishaps can be forgiven for the warm atmosphere they brought to the show, with their energy and interactions with the audience.

The first half was a performance by DIM, who, with audience suggestions, created a musical set in a sperm bank called Who’s the Daddy?. The result was hilarious, and a testament to both the comedic and musical skills of the group. A mixture of comic timing and vocal talent made for a really entertaining show. Standout performances came from Rosie Weston, who gave birth to a water bottle on stage, and Barney Mercer, who played a corrupt ‘sperm merchant’. The show could have been said to lose momentum towards its conclusion, but still remained highly enjoyable.

After the interval, the Tony’s troupe performed ‘Revolting Children’ from Matilda. The choreography coordinated by Martha Wrench was excellent and suited the song well. Elliot Mather delivered several show-stealing performances, showcasing his impressive vocal range.  The live band were highly impressive and complimented the troupe’s performance.

The use of a simple stage and dramatic lighting made the show look professional. The choice not to use costumes was brave but ultimately meant that our focus was entirely on the theatrical performance itself.

Overall TDFC’s ‘A Night at the Tony’s’ was a light-hearted and well produced showcase of Durham’s finest musical theatre talent. The troupe worked well together, and every performance was of an incredibly high standard. The black-tie event left the audience in awe at the pure scope of talent that Durham has to offer.