Review: A Murder is Announced 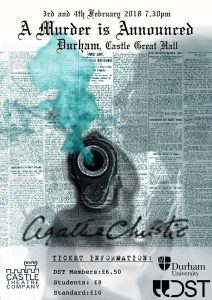 On Saturday, 3rd February, Castle Theatre Company presented a sold-out performance of A Murder Is Announced, Leslie Darbon’s stage adaptation of Agatha Christie’s 1950 murder mystery novel. A murder is announced at 6:30pm at Little Paddocks – this serves as the ‘only intimation’ for the gruesome event and the subsequent unfolding of the mystery over the course of two hours. This enticing production was brought to life through the immersive choice of venue and black tie dress code, as well as the convincing performances given all round, overall making for an enjoyable evening. CTC’s production was full of the tantalising and intelligent complexity for which Christie is best remembered.

What stood out most strongly was the extent to which Castle Theatre Company succeeded in creating an immersive, period-appropriate environment for the play to take place. The antiquity of the Great Hall in Castle was highly effective for creating a stately and old-fashioned atmosphere; the ‘black tie’ dress code further enhanced this sense of antiquity, encouraging the audience to ‘become’ the same class and of the same era as the characters we could see before us. However, it does beg the question of why this dress code was necessary – should the set and costuming not sell the era effectively enough on their own, and if not, why not? The dress code was nonetheless effective in crafting the atmosphere that the show demanded. Furthermore, the set and lighting were both skilfully used to set the ambiance of a murder mystery – the contrast between the comfortable domesticity of the set and the disconcerting nature of the low lighting upon entrance into the Great Hall created the sense of concealment vital to a mystery, as though this seemingly comfortable household might be hiding something. From the very start, the tone of the play was conveyed highly effectively.

All of the cast gave convincing performances, but special credit must go to Sarah Cameron, whose portrayal of Letitia Blacklock as a seemingly headstrong woman, who in fact turned out to be a cruel and self-motivated moneygrabber, was a standout even amongst a strong cast. Equally impressive was Alice Lassman as Mitzi, whose overdramatic paranoia provided necessary comic relief whilst not detracting from the otherwise serious tone of the show. Particularly memorable is Mitzi’s revelation to Letitia that she had not, in fact, been lying to everyone in the preceding scene – the strong characterisation from both actresses shone through to make for a brilliant buildup and release of tension in a highly powerful moment. The only aspect of characterisation on which the play fell short was the conveying of age to the audience – it was difficult to gauge the ages of the characters through the actors’ tone or physicality, perhaps detracting from full engagement with the play. However, this was only a minor issue in what was otherwise a production full of strong and convincing performances by all.

The technical aspects of the play were also executed effectively, with sound and lighting both used appropriately. Though the transitions between scenes could arguably have been slicker, with the long blackouts feeling like an interruption in the flow of the play, they were nonetheless effective in building tension through the emphasis on cliffhangers and sudden plot twists – vital to an effective performance of a murder mystery. The interference from sound did at times detract from the performance by muffling some of the actors’ lines, but sound effects were not used frequently enough for this to be a serious issue, and their usage was selective and effective, contributing to the believability of the time period in which the show was set. Altogether, Castle Theatre Company did an impressive job with the technical possibilities, enhancing the audience’s engagement with the play.

Overall, Castle Theatre Company have excelled themselves in this tantalising and atmospheric production of Darbon’s show. The play, running until Sunday, 4th February, showcases clear hard work and talent all around, from an immersive set and venue to engaging performances to the effective buildup of tension through lighting, ‘A Murder Is Announced’ is not one to be missed as it brings to life the excitement and intrigue of the murder mystery genre.

A Murder is Announced will be playing in Castle Great Hall at 8pm on the 4th February.