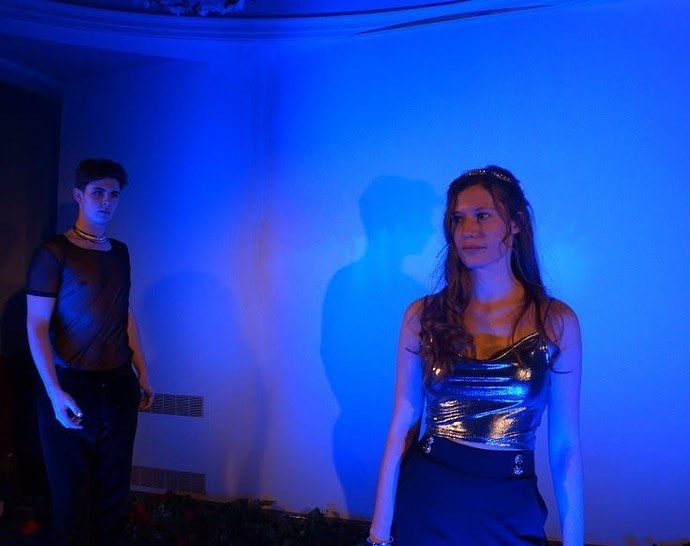 On entering North Road Methodists’ Church, you’re greeted by a myriad of vines climbing the walls and pillars to form the Keatsian flowery bowers which underscores the setting and theme of newly-established Blizzard Theatre Company’s wistful A Midsummer Night’s Dream.

Through the use of live music, dancers and clever tech, director Barbara Zboromyrska Zboromyrska has managed to create an immersive and engaging production of an old favourite. It can be tricky to work live music into a play unscripted, but violinist Chris Larkin and flautist Lottie Apsey added immensely to an already atmospheric play and — while it would have been nice to hear more of them as introductory or incidental music — their polished performances of well-chosen pieces were a lovely addition to the experience as a whole. Likewise did dancers Nat Demarchuk and Rachel Barlow help to communicate the dreamy otherworldliness of the fairies without coming across awkward or contrived. I would also like to take a moment to praise the tech directors Callisto Musyck and Lamesha Ruddock for a performance that was both thoughtfully lit and absolutely seamless in its transition.

The acting was thoroughly enjoyable, with the chemistry between the two main pairs evident without feeling forced. The relationship between Hermia (Emma Gratte) and Helena (Lisa Prescott) was particularly well-handled, and Prescott’s Helena in particular was a real joy to watch. So too were Isabelle Bruce’s regal Titania and James Murray’s mischievous Puck—who deserves a special mention for managing to flit around stage so delicately in Doc Martens—as part of the fairy court. Orlando Riviere’s Oberon was likewise as well performed, his glam rock costuming an interesting compliment to his authorial demeanour. Another stand-out performance was Eleanor McIntyre’s Bottom. Her comic timing, stage presence and natural chemistry with fellow actors made her performance a delight to watch.

I would love to congratulate Blizzard for doing something I had thought impossible: making the mechanicals funny. I’ve seen (maybe too) many productions of Midsummer, and this was the first time I was genuinely pleased to see them. Through the energy the cast, the staging and the fun breaking of the fourth wall, it was wonderful to see new life and enthusiasm brought to a subplot which can often feel laboured. Special mention ought to go to Elliott Howell’s put-upon Peter Quince and Toby Wesselingh’s Wall for the levity they brought to the stage, standing out among an already stand out set of performers. The humour on the whole was well executed, although there were a few comic moments in the text which could have been made more of—Lysander trying to share Hermia’s bed, for instance—and some actors tailed off the end of sentences, especially at the beginning of the play. However, I’m sure these are first night problems which will be ironed out as the show runs its course.

Blizzard’s A Midsummer Night’s Dream is a fantastic way to spend and evening. Through thoughtful direction, clever staging and an abundance of acting talent,  Zboromyrska Zboromyrska has put together an immersive, atmospheric production which is well worth seeing. Make sure you don’t miss this dreamy show!

A Midsummer Night’s Dream will be playing at North Road Methodists’ Church on 7th March.