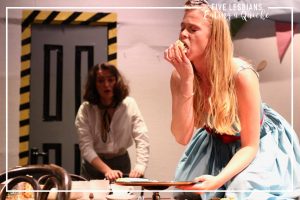 Rare is the play that makes me wish it had lasted a little longer – especially in the Assembly Rooms Theatre. With that in mind, Hild Bede Theatre’s 5 Lesbians Eating a Quiche disappointed only in its brevity. Director Lucy Knight can be extremely proud of her talented troupe, who revelled in their wonderfully large first night audience. Yes, the play is about a group of lesbians, but in reality, that isn’t as important as the fact that they’re damn entertaining. Any fool who perpetuates the idea that women aren’t funny should come and see this production, and promptly be left with egg on their face: I haven’t laughed as consistently in a show in a long time.

Thank goodness for shows like this that get it right; this is a performance that showcases almost all of its cast’s best qualities: strong character acting; smart comic timing, and, more importantly, smart comic understanding. This is a group that wrings every drop of humour from the text, milking the audience for laughs from the minute they enter the theatre: the lesbians welcome you into the auditorium, slap a name-tag on you, and from that moment you are welcomed into it all: they pull the audience into their fun as openly and liberally as this paragraph overuses colons. 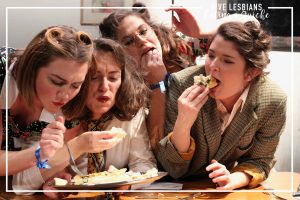 That said, from time to time that openness trips over itself; my main and only real gripe is the way in which the cast’s bantering style can lose its direction. And whilst I laughed consistently, I felt there was room for this group to make that laughter harder. Without calling out individuals, as to some extent all parties were culpable, it seemed in moments that the ad libbing and giggling overlapped too much, slowing and blunting the comedy when one wants these moments to prick the audience into laughing further.

Lily Edwards and Jasmine Price excelled especially, both superb character actors. In particular, Edwards’ facial expressions, audience engagement and timing was superb, yet simultaneously, she can afford to be slightly more selective with these in order to maximise the punch of these moments. The major criticism seems to be an easily rectifiable one: the show could be slicker. The quasi-panto hilarity is one of this play’s principal strengths, but also its biggest weakness, and the cast have to stay sharp in these moments to make the most of what is a very strong opening to this year’s full Assembly Rooms calendar. 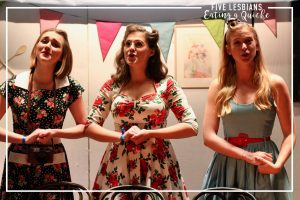 If they do that, then what a bar to set for the rest of the term. This was a booming showcase of comedy 101: the audience was captured from the first minute by wonderful immersive character acting, and splendid decoration of the space; our attention was kept by infectious energy and superb wordplay, and for me, it was over a little too sharply. The blackout came as I was still hoping for one big closing laugh, but I suppose that is the script denying this cast the final punchline they deserved. Magnitude of the finale aside, this a show you can go to knowing you will squeeze every penny from your ticket price. So with that in mind, dear fence-sitting reader, go and help build on the wonderful first night turnout, and revel in the comedy that these gifted ladies will serve, even fresher and richer than Vern’s red onion and spinach quiche.