Maddie Lock returned for a second helping of Hild Bede Theatre’s sapphic, eggy production, this time at the Gala Theatre. 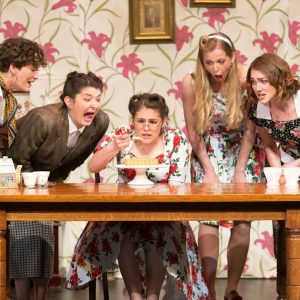 For one night only Hilde Bede Theatre’s superbly crafted production of 5 Lesbians Eating a Quiche returned to the stage and proved to be an absolute delight, with all the right ingredients for a very successful performance.

As soon as I set foot into the auditorium, it was as if I had stepped back in time not just to witness but to partake in the 1956 meeting of the ‘Susan B Anthony Society’. Armed with my new identity, ‘Lynn’, I was quickly ushered to my seat. The audience watched with amusement and slight bewilderment as the five committee members welcomed each of their ‘society members’ in as cries of “How is the crochet going?” and “It has been far too long!” bounced around the auditorium, creating a lively and energised atmosphere before the show had even begun. One of the overwhelming strengths of this production was its interaction with the audience, especially the singling out of the abominable ‘Marjorie’ by a spotlight, becoming the butt of many a joke and consistently drawing laughter from the audience.

The five actors all excelled in their performances as they each created unique and well developed characters. Rosie Minnitt as Wren shone with her expressive facial expressions as each new drama unfolded. Her eager enthusiasm gave the sense that she may break into song at any moment – particularly as she took the first tantalising bite of quiche – a very effective use of suspense. Ella Blaxill as the flouncy, posing, and slightly wild Ginny created great moments of comedy with her hugely varied use of modulation, her cries for her lost cat Rachel being just one of them. Her mounting of the table to demolish the final quiche was quite spectacular, and, combined with Lily Edwards’s perfectly timed “That’s very good technique!”, had the audience in stitches and elicited a round of applause mid-show. However, the ultimate strength of this cast was the way in which their characters interacted with each other, as each relationship brought some new comedy. The moments such as the singing of the society’s anthem, the scornful attacks on Marjorie, and the comically different reactions to revelations such as the bomb and Lulie’s pregnancy were some of the best in the show.

Although the pace of the opening scene was perhaps a little slow at points, this disappeared with the commanding entrance of Jasmine Price as Lulie, the society’s much admired yet hilariously blunt president. The script was filled with innuendos and comic punch lines that largely had every laugh wrung from them, such was the skill with which they were delivered. However, one of the most effective moments came in the shocking death of Dale played by Mally Capstick. The audience, previously laughing away, was suddenly silent as Dale, trapped outside in the toxic air gazed through the window. The gravitas of the solemn singing of the society’s anthem in her last moments served to create all the more humour when stifled giggles became roars of laughter at the wonderfully absurd smear of blood and quiche left behind on the window. Another moment of amusing melodrama came with the nuclear attack captured by bright red flashing lights, sound effects, some impressive slow motion reactions and Vern rolling haphazardly across the stage.

Having watched the Michaelmas term production in the Assembly Rooms Theatre, directed by Lucy Knight, I felt that all the charm and joyfulness of the original had been retained. Damson Young, stepping up as director for this rendition of the production, did an excellent job not only in creating a tight cast of five fantastic characters on stage, but also in adapting the show to the far larger Gala Theatre. Although there were one or two moments of slightly awkward blocking, on the whole, the added space on the stage was well-used and the show felt no less intimate, with the audience happily participating throughout. This included, at one point, a wonderful audience-wide declaration of: “I am a lesbian!”

The stalls of the Gala Theatre were packed out for this one-night-wonder, and credit for this must go in part to the spectacular marketing done by Rosie Dart and Elliot Burford. The constant barrage of egg jokes, quiche shaped fliers, and of course the video interviews with the Susan B Anthony society committee meant few were able to resist this evening of hilarity, and if you did, you certainly missed a treat.