Following previous successes in their niche of small cast contemporary musical theatre, I was excited to see Tone Deaf Theatre Company’s 35mm: A Musical Exhibition. The show promised a musical retelling of a series of photographs, and we were not disappointed by the talent on show in this production. This song cycle by Ryan Scott Oliver challenged its performers to jump between roles to a challenging contemporary score.

Upon arrival to the Mark Hillery Arts Centre, I was immediately blown away by the set up. The technical team, led by Michael Crilly, ought to be commended for their work, both in design and delivery. I was thoroughly impressed with the technical aspects of the show, with an incredibly smooth run, with slick transitions, balanced sound and impressive projections. Lighting design by Helena Trebichavska reflected the varied styles of the show, particularly through use of side lighting which 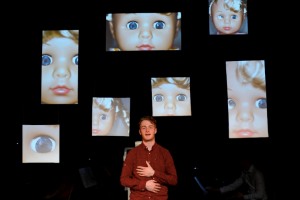 allowed for beautiful mixes of colour and provided subtle yet effective changes during songs. I was pleasantly surprised by the lack of technical hiccups, especially for a first night, with all aspects running smoothly from Crilly’s team.

I was excited to see the directorial debut from Sam Baumal, especially after knowing how long he has wanted to bring this show to Durham, and I was impressed with the level of characterisation from the ensemble. Baumal’s simple staging, using six blocks freely as set allowed us to focus on the emotion of the songs.  At times I wished there was more development of the moments between songs, which I felt was slightly rushed in order to get to the next song. It would have been nice to see more of these relationships. The level to which Baumal has worked with the actors on their performance through song, however, is evident. This staging was supported by choreography from Ava Cohen. I enjoyed the performance of the choreography on the whole, reflecting contemporary and jazz styles, although sometimes this felt too ‘dancy’ for the nature of the songs. ‘The Ballad of Sara Berry’ was a personal highlight for me.

It was announced upon arrival that one of the performers was unwell and that her role would be split between the musical director singing and the choreographer and assistant director performing on stage. Having spoken to the team, I learned that this change was made during the dress rehearsal, and was impressed to see them pull off this arrangement. The unsual aspect of an off-stage voice and silent performer was initially a little jarring, but this did not detract from the performance, and the various stand-ins did an incredible job of keeping the show going. I was disapointed to not hear Izzy Mackie’s performance; however, the ensemble were not deterred by this and delivered a solid sound, covering complex harmonies with ease. The cast of four all have performed in Durham before, but it was refreshing to see them take centre stage, and to see these singers in a 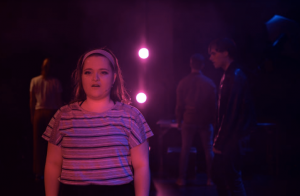 new light. A standout for me was ‘Hemming and Hawing’, sung by Rory McNeilage and Olivia Jones, who blended beautifully and delivered a heartfelt performance. Ralph Skan delivered excellent solo performances, displaying prowess in his vocal control and acting ability. Jonny Hewitt was the perfect duet partner, blending beautifully with Skan in ‘Seraph’. As a whole, ensemble singing proved tighter than solo work, and there were a couple of softer moments in which I wished solo singers had a little more support. The level of detail achieved as an ensemble was impressive, even a woman down, and the harmonies were tight and effective.

The musicians, visible behind a translucent cloth, were slick and provided a lot of the drive for the show, particularly in the strings section. Credit must be given to Emily Winters, for conducting the band, filling in vocal harmonies, running on stage to join the beautiful acapella quartet ‘Mama Let Me In’, doing all of this in six-inch heels.

Overall, considering the last-minute changes, I was impressed with TDTC’s production. The company have set the standard for technical prowess and ensemble blend that will be a tough act to follow. They pulled off a challenging, quirky show and while I would have loved to have seen the full cast perform, I credit the whole team for delivering a brilliant show, and would urge you to get a ticket!

35MM will be playing in the Mark Hillery Arts Centre at 7:30pm on Friday 3rd and Saturday 4th May.