25 and Counting, written by student Florence Petrie, explores the challenges faced by a group of housemates after university. Sensitively tackling themes such as turbulent friendships, toxic relationships, emotional abuse, and sexual assault, the play accords with Pitch’s aim of producing plays which are current, impactful and contain a vital message.

A great strength of Petrie’s play is that it is extremely relatable. There is much in it that the student audience can identify with, such as the struggle to answer that simple yet enormous question of ‘What do I want to be when I grow up?’ and the overwhelming awareness that you are now ‘grown up’ and still have no real idea. Even the set itself, a kitchen with an overflowing bin and cluttered counters, is a familiar sight; on entering Leech Hall, you feel as if you are entering a student house. 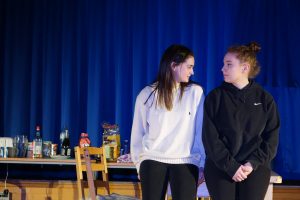 Petrie, writer and director, perfectly balances the play’s darker and more poignant sections with moments of humour. The intensity of the scene between Pia, Fearn and Lauren, culminating in Lauren’s confession that she feels as if she has been ‘tagging along’ in the others’ friendship for five years and has been deeply hurt, is alleviated by Olivia bursting in and incongruously exclaiming ‘I’ve just had the best avocado on toast with James!’

There are moments, however, when the pacing could be improved. The age transitions in Fearn’s opening monologue feel a little rushed; conversely Pia and Jess’ final scene together, while well-acted, begins to drag: the speeches are slightly repetitive and could be condensed. Additionally, the decision to have no extra actors in the party scene is questionable; lines like ‘weird crowd here tonight’ are jarring as a consequence.

Overall, the play’s blending of naturalistic scenes, in which characters paint their nails and eat toast, with physical theatre is innovative and effective. The routines, choreographed by Kailin Solomons and Frankie Haydon-White, are polished and capture the characters’ inner turmoil: in the dance after the argument between Pia, Fearn and Lauren, the actors fluctuate between reaching for and pushing away each other, conveying their inability to decide whether they should attempt to salvage their friendship or go their separate ways. The puppetry dance near the end is particularly poignant with its show of solidarity: the actors support and embrace one another.

Esther Levin excels as Fearn, perfectly capturing the character’s oscillations between abrasiveness and vulnerability. At the party, she is palpably bitter, spitting out scornfully that Olivia is the ‘perfect person’ and mocking her for dating James for years with no engagement: ‘Where’s that going?’ Later, when she reveals what James did to her, she is completely distraught. Levin has an audible lump in her throat, tears in her eyes and physically shakes: her performance is powerful and deeply moving, all the more so in light of her earlier confidence and derision. Catherine Wright gives an equally compelling performance as Lauren. Her earnestness and optimism render her immediately likeable to the audience, even as other characters overlook her. Wright’s devastation as she learns why her housemates, for the sake of whom she has stayed in London despite hating her job, really became friends with her is touching; she suddenly appears fragile and utterly crushed. 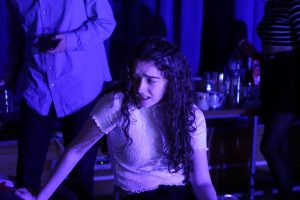 Danny Parker has a demanding role as James, the serial emotional abuser, but rises to the challenge and is totally convincing in his attempts to charm, manipulate and twist situations: ‘Do you not trust me?’ Lucy Sale plays Jess: five years older than the others, Jess is on the outskirts. Sale conveys this awkwardness very well when she and Fearn drink together. She keeps clearing her throat, and eventually attempts to start a conversation (‘How’s working at…?’) only to trail off upon realising she has no idea what Fearn’s job is. Pia (Sarah Cameron) begins the play as flirty and light-hearted, but comes into her own in the second half, realising the importance of friendships. Cameron has exactly the right balance of defiance and tenderness as she defends her friends in front of James then Jess. Emma Broadhurst (as Olivia) also gives a laudable performance: the journey she undergoes from berating herself to standing her ground with James – ‘That’s for me to figure out’ – is very satisfying to watch. All the actors make their lines sound natural and spontaneous, despite the script being a little clunky.

Tech is slick and well-utilised, from the play’s start, when projections of the characters’ social media pages give us a snapshot into their lives and personalities,  to the end, when simple train sound effects manage to create the atmosphere of a station.

Florence Petrie should be proud of what she has accomplished with 25 and Counting: moving and thought-provoking, with a talented cast, this show is a must-see.

25 and Counting will be playing in Leech Hall in St. John’s College at 8pm on Monday 18th March.