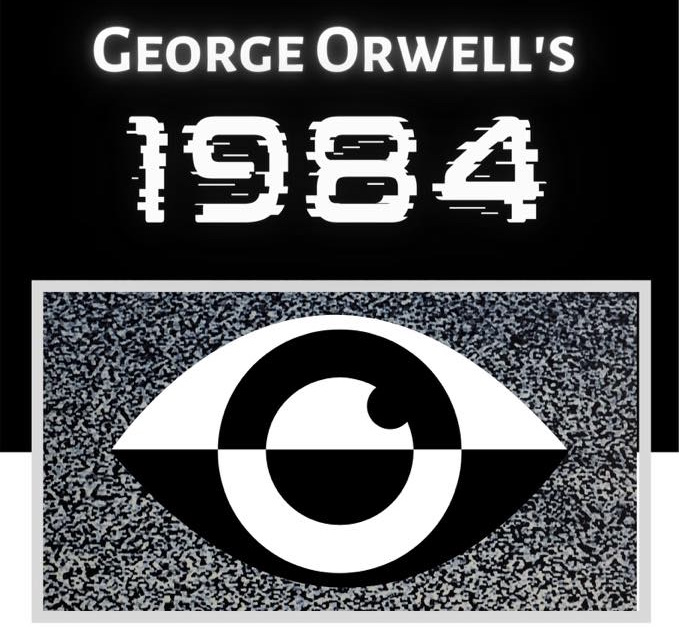 There aren’t many other plays than 1984 that strike such a painful resonance with the year we’ve had. It was a powerful experience watching it in a time of the highest level of government control and surveillance in UK history. Orwell is loving it.

Aaron Rozanski, as Winston, was at the centre of the play and came into his own in the abstract dream monologues. The intensity of his screaming paired with masterful physicality permeated the action, ensuring the audience never lost sight of the stakes. Rozanski demonstrated admirable control in his dialogue whilst also appearing to let go in the scenes of torture completely. The initial defiance he displayed as Winston felt jarring at times but meant the audience was shown the remarkable emotional transition from rebel to slave in its shocking entirety. At times, he lacked the emotional weight and gravity to befit Winston’s position, and I felt we were never truly granted an insight into his psyche. However, the strength of the ensemble meant the intensity of the production never dipped.

The directorial team of Jenny Shpeter and Harry Jenkins should be celebrated on the strong ties they have manifested within their cast, evidenced in the irrefutable strength of the ensemble work. The chemistry between Charlie Howe and Adela Herdandez-Derbyshire was electric, and their scenes together were set apart from the rest. Both have stage presences that could stop a bus, and Howe’s portrayal of past Winston was especially nuanced and sensitive. Sean Alcock and Richard Sharpe were endlessly entertaining; their distinct characters drove the action of the play whilst giving darkly comedic insight into the world of the Party. John Duffet commanded the stage as O’Brian, and there was no anticlimax in his eventual emergence. Special mention must be given to Alcock and Duffet, both giving standout performances though having stepped in at the last minute.

In a play concerned almost entirely with language and words, it is a shame that the actors did not seem to know theirs consistently. Cues were often missed, and the actors spoke over each other throughout. More innovative staging could have been experimented with, and it did not feel like the COVID restriction exemption was utilised to its full effectiveness.

The main issue of the production was the use of Sullivan’s adaptation. For an adaption of a novel that is so psychological, the writing fell flat. The four Party members’ function to recreate the action around the central character of Winston meant the dialogue was fast-paced and needed to be perfectly slick, which sadly was not always the case. Actors were forced to shift between roles in a meta-theatrical performance within the performance, which often hard to follow due to the intense pacing and subtlety of the changes, undulating between past and present. The instances of repetition felt forced and obvious, instead of hammering in the psychological interference of Big Brother. Overall, this made me reflect on the reality that just because anyone can write doesn’t mean everyone should. Nevertheless, the introduction of both dedicated and interesting characterisations from Alcock and Sharpe and consistently strong and naturalistic performances from Howe and Hernandez-Derbyshire were impressive.

The play desperately needed more exposition. Though I doubt there was anyone completely void of culture in the audience, it still relied too heavily on everyone knowing the concepts of the novel inside out. To even have had the process of the interrogation room being set up, perhaps as the audience entered the theatre, would have grounded the production with stronger foundations. Instead, what we were given was mostly a lot of yelling to portray: ‘this man is being reconditioned due to the fact he is a thought criminal as this is set in a dystopia that is still startlingly similar to our own reality.’ The decision to have Winston starting on stage for no apparent reason, other than testing Rozanski’s endurance and meaning no last-minute toilet breaks, was to the detriment of establishing the action.

The use of tech was incredibly ambitious throughout; when it worked, it was breathtaking. A wide variety of lighting designs were incorporated; the blindingly stark lights that accompanied the Big Brother announcements were particularly striking, lighting the actors like insects under a microscope. The lighting was never predictable. However, though a source of considerable visual interest, more could have been done with the lighting to clearly separate the past from the present, the real from the imagined. The sound design was imaginative and exciting, with the effectiveness only being lost with a few late cues. The addition of a swelling cinematic soundscape was emotional but often felt like a crutch for the action of the play, and ensured the production remained bizarrely poised between a surrealist and realist approach.

The hardships faced by this team in putting on this production should not go unacknowledged; it was harder to get that play on that stage than it was for Winston to snag himself a real cup of coffee. Having learnt post-performance that the cameras were not a physical embodiment of the surveillance state, I can recommend streaming 1984. It felt like the bones of a truly excellent production, and in different circumstances, the cast and crew would have been able to achieve a far greater level of polish. Thematically inappropriate as it may seem, it was this sense of hope that characterised the production as a whole, and I eagerly anticipate seeing what all involved do next.