Review: Miscast Showcase, ‘In the Eye of the Hurricane’ 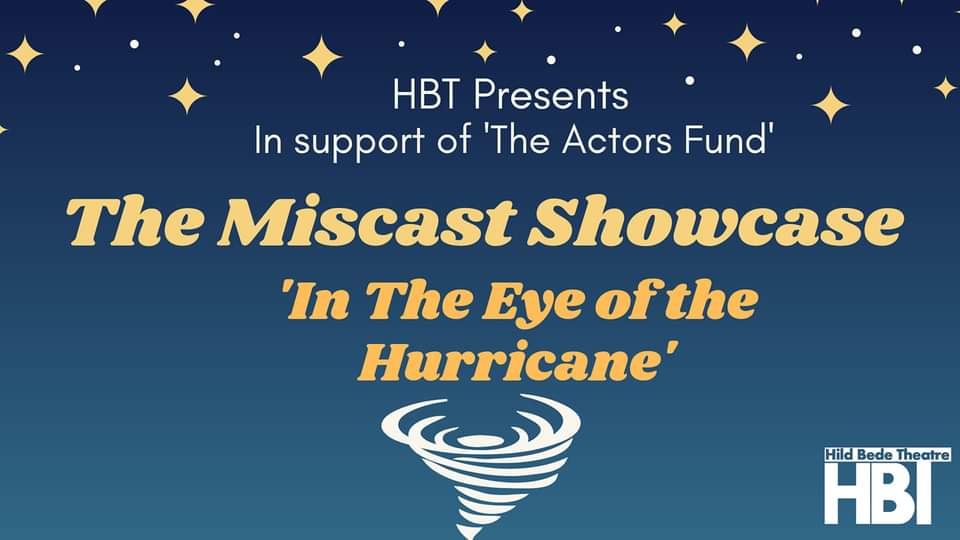 Emily Mitchell is thoroughly entertained by Hild Bede Theatre’s Miscast showcase, a collection of students performing as characters as which they wouldn’t traditionally be cast.

Firstly, it was just so lovely to be back in the world of theatrical performance. Theatre has this exceptional quality that makes you feel at home and wraps you up in someone’s else story for a little while. The particular theme of this Miscast comes at such a timely moment and feels very true to life. After all this time of uncertainty, there is this longing for escapism that theatre caters to so well. Through Miscast, I caught glimpses of so many intriguing narratives brilliantly captured by the powerhouse cast of performers. The sheer joy of Miscast is seeing how different performers interpret these iconic roles through their own unique lens, and here, it paid off perfectly. It felt like such a cohesive show thematically. Every excerpt dealt with some personal struggle or development that was conveyed brilliantly.

The medium of Zoom performances is undoubtedly new territory for the industry, but this cast stepped up to the challenge. Every one of them drew me into their performance and left me wanting more. In particular, some of the excerpts that are usually performed with other characters on stage felt heightened by the isolating nature of Zoom. On the flipside, those more individualised performances truly allowed each member of the cast to shine and showcase their strengths. Every performance was packed full of emotion and nuance, providing both strength and softness in equal measure.

Tomos Wyn opened the show with a knockout performance of ‘I Dreamed A Dream’, and from then on, I was fully invested in the rest of the show. Tomos set a high bar, but every performer managed to live up to it. The acting was stellar, perfectly encapsulating each character. Jasmine Doyle chose an excellent song, emphasising that soft and sweet but overwhelming feeling of a first crush. Though Lungs was new to me, Jennifer Lafferty’s performance ensured that I needed to add it to my never-ending list of plays to watch. Vivienne Shaw just was the perfect Elle, highlighting a more vulnerable and broken part of her narrative. Next, Giorgia Laird’s interpretation of Empty Chairs at Empty Tables was exquisite, with the emotion threatening to choke her Marius. Georgia Onslow had a commanding presence, complemented by the gradual build of her performance. Through their take on Cassius and Brutus respectively, Hannah Burnett and Emily Tarbuck breathed new life into Shakespeare and reminded us of how the play echoes current events, even during lockdown. James Murray’s Rizzo was a delight to watch, hilarious in her sarcastic, biting wit. Closing out the first half, Libby Crombie captured the sheer joy and energy of Kinky Boots.

After the interval, Olivia Jones ensnared me once again. She set the scene so well and ensured that you wouldn’t forget her performance. Matilda Hubble added a new dimension to the character of Matilda and made the song resonate in a whole new way. In his performance, Oscar Scott proved himself an apt storyteller, creating a strong and believable narrative with touches of humour and emotion combined. Olivia Adderley captured that spirit of childhood imagination and the pathos of childhood experiences juxtaposed by fantastical dreams. For me, Robert Morrissey’s performance as Rita was a standout of the entire show. It was just incredibly striking and memorable, though I doubt I’ll be forgetting any other performance any time soon. Georgia Malkin nailed Mrs Lovett, and I’d be intrigued to watch a full production with her in the role. As JD, Florence Lunnon created this sense of nihilism and danger lurking beneath the seemingly charismatic surface. In reimagining the role, there were some fascinating note changes that work excellently with the character. Hana Fuji Bennet’s interpretation of Hurricane was this soft and gorgeous song, infused with emotion and an aching weariness. Finally, we were treated to an apt reinterpretation of an iconic song. Without giving too much away, Lauren Brewer’s skilled wordplay worked perfectly with the incredible vocals of Alexandra Bjornstad and Zoe Buckthorp.

Overall, this Miscast was a smash-hit performance that’s perfect for escaping the world around you for a little while. Just sit back and let these phenomenal performers give you a little bit of theatre magic.