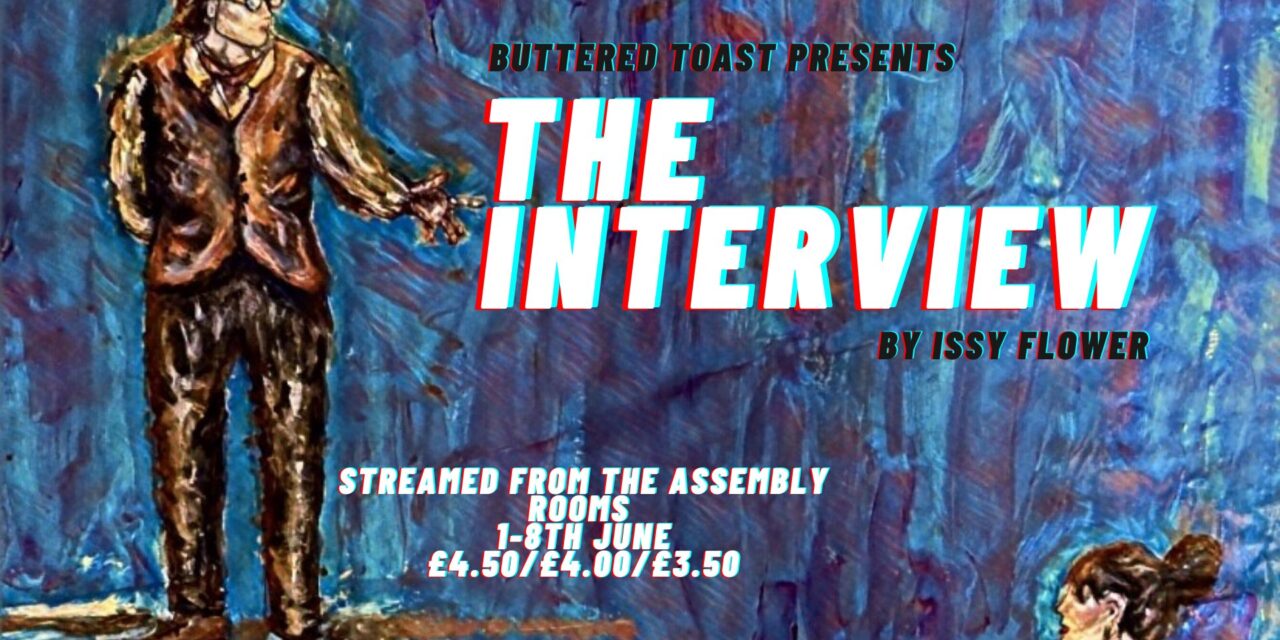 Buttered Toast’s production of The Interview does not disappoint. Its premise of washed-up ’60s TV star, Peter Newberg – deftly portrayed by Jack De Deney – being interviewed by student journalist, Liz – convincingly played by Eleanor Storey – is  transcended by its performances and writing. The play acts as a study of Newberg from Liz’s perspective, examining his narcissistic personality and the deeper feelings underneath.

Efficiently moving between light humour and tender emotion without losing authenticity, Issy Flower’s writing must be commended. What truly breathes life into the script are the performances, fantastically directed by Jacob Freda and assisted by Elise Garcon. They make novel use of the small space available, with the characters appearing throughout in exciting and varied positions.

The set, Newberg’s apartment, has been excellently designed, with elegant furniture made from pristine wood, conveying the flamboyant personality of his character while remaining aesthetically pleasing. The costumes, likewise, encapsulate the characters. The straight-talking Liz is apparelled in jeans and a dark turtleneck and held in contrast to Newberg, smartly dressed and topped off with a cravat. If one item was picked to display the character of Newberg, it would be a cravat.

The contrast between the characters is as evident in the performance as in costumes. De Deney’s bombastic and floating portrayal of Newberg is countered by Storey’s more reserved and composed demeanour as Liz, which erodes as alcohol is consumed as the play progresses. Storey conveys the growing comfort Liz feels around Newberg – in part due to the effects of alcohol, which Storey also makes clear. Meanwhile, De Deney’s portrayal of a sexually deviant, drug-obsessed and egotistical retired actor is very convincing.

The engaging performances of both actors maintain undivided focus throughout. The only issue arises from the audio quality of the recording, which unavoidably leads to some lines being lost, particularly when actors are speaking offstage. Nevertheless, De Deney excellently displays the superficial narcissism of Newberg, which covers the damaged man within and lashes out to protect himself. Those moments when that falseness is challenged by Storey’s poignant questioning and De Deney unleashes combinations of frustration and disappointment are some of the best in the play. Although the older nature of Newberg is not as convincing, given De Deney’s extensive brown hair and excellent mobility, his performance more than makes up for it. The relationship between Newberg and Liz begins as confrontational, as Newberg tries to impress with his braggart-like behaviour, and Liz refuses to take him at face value. As the play progresses, this relationship becomes more intimate and genuine, which both Storey and De Deney capture brilliantly.

The subtle lighting changes, implemented by Technical Director Charlotte Beech, help invoke the intimacy of those moments of revelation and opening up, convey the passage of time and highlight the use of curtains, allowing authenticity in the story. Ryan King’s filming and editing are effective. Occasional changes from the central camera to focus closer on the characters creates welcome variation and allow greater audience connection to the their psyches at key moments. The only problem is the difficulty in hearing some of the music played during the performance; however, this is relatively unimportant, as it fulfils its purpose of showing the egotism of Newberg.

Overall, The Interview is a fantastic production, which combines a fascinating character study with brilliant performances. I would encourage readers who want a relaxing play with comical elements to watch if they have the opportunity.

‘The Interview’ is available to stream until midnight on June 8th, and tickets purchasable here.