Hamilton on Disney+: a collective review 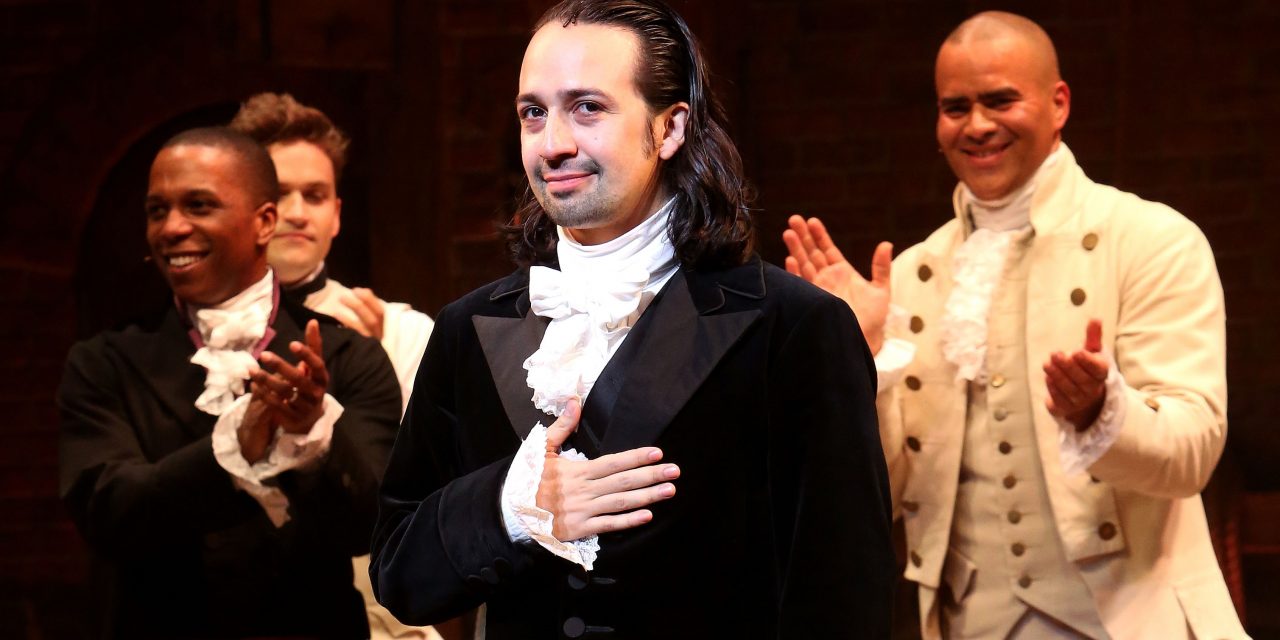 We are all in The Room Where it Happens now… our reviewers give their take on the Broadway original-cast recording of Hamilton released to Disney+.

Hamilton – on stage versus screen?

Watching the ‘Hamilfilm’ is undoubtedly a different experience to watching it live. As a musical where nearly all cast members are on stage for a majority of numbers, choosing a cinematographic focus while allowing the viewer to see as much of the onstage action as possible is a tough balance to strike. ‘My Shot’ is particularly challenging: a heavily choreographed number for the entire ensemble, despite the focus being largely on Alexander Hamilton, the edited product switches between multiple camera angles in an attempt to contain it all. While this variation captures the energy of the song, one cannot help wondering what the ensemble would look like from a singular angle, were you sat within the audience.

That said, the opportunity for close-up recording captures a remarkable amount that most audience members would struggle to notice on a live stage. A quick glance back or a small raise of the eyebrows has ten times the impact that it would at the theatre and allows us even more appreciation of the depth of these characters. One actor that stands out on screen, for this reason, is Jasmine Cephas Jones. As Peggy Schuyler, her expression during ‘The Schuyler Sisters’ and the beginning of ‘Satisfied’ is particularly powerful in showing the full warmth and humour of sisterly love. In contrast, close up shots of her portrayal of Maria Reynolds depict a level of intensity and sadness that cannot be appreciated from a distance.

The Power of the ensemble

It has become almost cliché in theatre that the ensemble is the most important role; something you tell yourself when you miss out on the lead. However, ‘Hamilton’ proves this to be true: the ensemble makes this show. They create atmosphere, scenery, and tell us how we are meant to feel towards each character. Centring around Hamilton, they project energy and focus onto the titular character and thereby give him his power, in much the same way as a traditional Greek Chorus.

The ensemble is ever-present in the background of most scenes. Whether draped on the stairs, walking the promenade or leaning on the frames and pillars, they quietly watch the characters on stage; they are the Eyes of History that Washington warns Hamilton about. Because of this, the scenes where the ensemble is absent become notably more intimate. For example, in ‘That Would be Enough’ and ‘Dear Theodosia’, their absence signals that we are getting to know the principles behind closed doors. Similarly, in ‘Best of Wives and Best of Women’, it creates a sense of foreboding for the coming duel between Burr and Hamilton.

I did find the forced visual directionality of the camera frustrating. Typically, there is a certain amount of freedom as an audience member to look over the whole stage; however, the recorded and edited experience meant the camera forced upon the viewer where to look and meant the ensemble did not always get the credit they deserve. In particular, Woman 3 – or, ‘the Bullet – lost out on her solo during Hamilton’s monologue in ‘The World was Wide Enough’ when the camera continued to favour him instead.

A Celebration of Costume and Colour

Aside from the more obviously outstanding musical numbers, one admirable facet of the production is Paul Tazewell’s costumes – and colour theory triumph. The assignment of a colour to each character allows the audience to differentiate between the multiple roles of actors more clearly and reveals character intentions before they have even sung a word. See Jefferson’s purple; the Schuyler sisters’ trio of pink, blue and yellow; and Maria’s red.

It also blatantly shows Hamilton’s Bildungsroman: from plain brown to war-stricken navy to rich green satin to cynical black, Hamilton’s clothing shines a light on his dramatic transition in status and age throughout the story. While this concept stood out to me when I saw the show live in its London 2018 release, it is only with the musical’s new virtual platform and close-up shots that the spectacle of Tazewell’s brilliance is fully realized.

Hamilton: a misleading monument to historical heroes and villains?

In the wake of the murder of George Floyd and recent BLM protests, statues of slave owners and racists have been torn down and vandalised. Rightfully so. However, as of yet, few have asked the follow-up question: if we are reassessing the ways in which we have glorified these white men in the form of statues and monuments, should we also be scrutinising the other ways in which their glorification has grown? In Hamilton, we are given an image of George Washington, framed as a courageous, honourable and humble Commander in Chief of the Continental Army and Model President. He was all of these things and more. Yet, Lin-Manuel presents us with only an idealised Washington, without reference to his slave-ownership or racism.

Slave owners undoubtedly played a dark role in history, helping to continue the cycle of oppression, vengeance and violence against slaves and African-American people. Does this mean then we should cut slave owners from our discussion of history? Of course not. But, it is vital to talk about slave owners like George Washington with the full picture in mind. He was both a brilliant leader and a slave-tooth implanting racist (look it up); a hero and a villain. It all depends on perspective. The question is now: are works of art like Hamilton a help or hindrance to the discussion about slave owners and their role in creating the systems of oppression playing out today?

The original Hamilton, and to some extent all subsequent productions, have an invisible yet renowned subtitle: the Lin-Manuel Miranda show. This celebrated genius and lovable nerd wrote the music, lyrics and book of the musical in which he then took the titular role, subsequently becoming a creator and publicity label for many subsequent Disney productions. Having sneaked a blurry Bootleg of the original cast Hamilton several years ago and then twice watched the West End version starring Jamael Westman as the titular character, it was fascinating to compare the two characterizations. Lin-Manuel Miranda is the definition of ‘scrappy and hungry’. His face is a constructed open-book, creasing or stretching to its emotional limit with the various turmoils and joys of Hamilton’s life. His small frame bounds around the stage with apparently limitless energy. Jamael Westman is different: young, good-looking and tall, he looks less scrappy up-and-comer and more like a Calvin Klein-model.

For the narrative of Hamilton to succeed, it demands the audience to root for the central character’s rise from poor immigrant bastard to powerful, wealthy politician despite his flaws; it is a heroes-and-villains, historically-misleading emblem of the American dream. Miranda provides all the grit, cheek and charm necessary for this narrative, the character’s passion for all things exuding from his sharp diction and energetic movement. On second viewing, having had time to grow into the role only a year after leaving Drama school, Westman was magnificent. Though he never matched Miranda’s passion and energy, he rightfully set and achieved a separate goal to a more suitable characterization, involving greater humour and a more intellectual portrayal of the character. I cannot wait to see how subsequent actors continue to make the role their own.

As of 6th July 2020, Hamilton is currently available to view on Disney+. 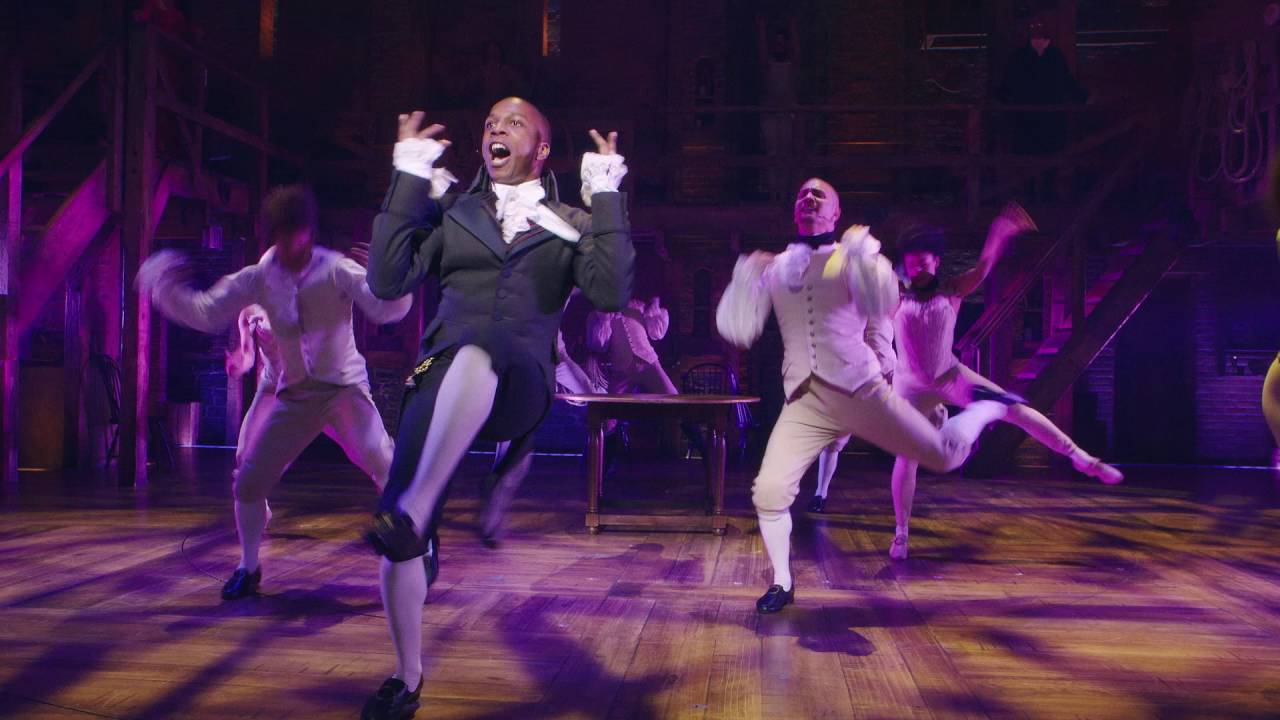