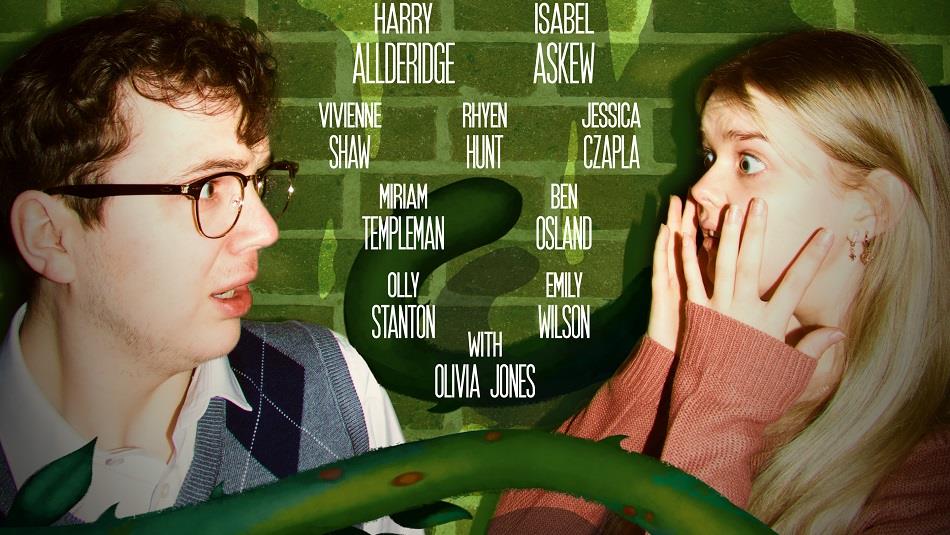 “Go see it, thistle be a night to remember!”

Little Shop of Horrors sprouted in the Assembly Rooms Theatre last night with true style. The entire show is a jungle of emotions, with vines of uniqueness, and quotability, not to mention an amazing score.

The musical follows Seymour – aa awkward floral shop assistant – and his strange plant, nicknamed Audrey II after his co-worker. However, little does he know that this ‘strange and unusual plant’ will develop a voice, a pot-ty mouth, and a desire for a rather strange fertiliser – human blood.  This adaptation perfectly combined the iconic, flawed characters, the pop-culture and B-movie tinted world that they live in, and the fun and frivolity of the music throughout in order to create a truly unmissable show.  Director Megan Cooper has, once again, done an excellent job with her casting of this show – every actor and actress suited their role perfectly.

Olivia Jones as Audrey II was absolutely spellbinding.  Her vocals blossomed throughout the show, and the unusual use of an on-stage ‘plant’ was a risk that most definitely paid off.  I never thought that I could have a girl-crush on a slightly maniacal carnivorous plant… yet here we are!

The on-stage chemistry between Seymour (played by Harry Allderidge) and Audrey (played by Isabel Askew) was tender – succulent even! – and this chemistry was only highlighted by ‘Suddenly Seymour’, a true unfurling of the budding relationship.  A huge congratulations must be given to the amazing band, directed by Josh Tarrier, whose consistency and reliability throughout allowed the cast to shine.

The mixture of dark and light-hearted humour was a key aspect of the musical, leading an audience to appreciate the form, completely separate yet intertwined with the content.  The choice to cast Ben Osland as the Dentist was perfect.  His portrayal of the sadistic Dentist was classic evil villain – but in the most hilarious way possible.  I didn’t know it could be funny to watch someone asphyxiate to death from laughing gas, but Osland executed this comedic yet dark moment tree-mendously.

The singing from both a solo and ensemble perspective was amazing.  Despite some unstable harmonies (which can be attributed to opening-night nerves), the cast did impeccably.  The three actresses playing the main chorus – Vivienne Shaw, Rhyen Hunt, and Jessica Czapla – had the most incredible voices, and as the show went on, their vocal blend and harmonies only improved. Most of the jokes were great successes with the audience, Howard Ashman’s lyrics being witty and well crafted.  A notably humorous performance was Miriam Templeman’s character of Mushnik.  The strong ‘oy vey’ nature of this New Yorker shines through, with emotions permeating through every line.

Little Shop of Horror’s crew and prod team was highly professional.  A round of applause must be awarded to Anna Woolaghan and Amy Shelmerdine as co-choreographers, whose choreography was effective and not overly complicated.

Overall, the show was utterly incredible.  Go see it, thistle be a night to remember!