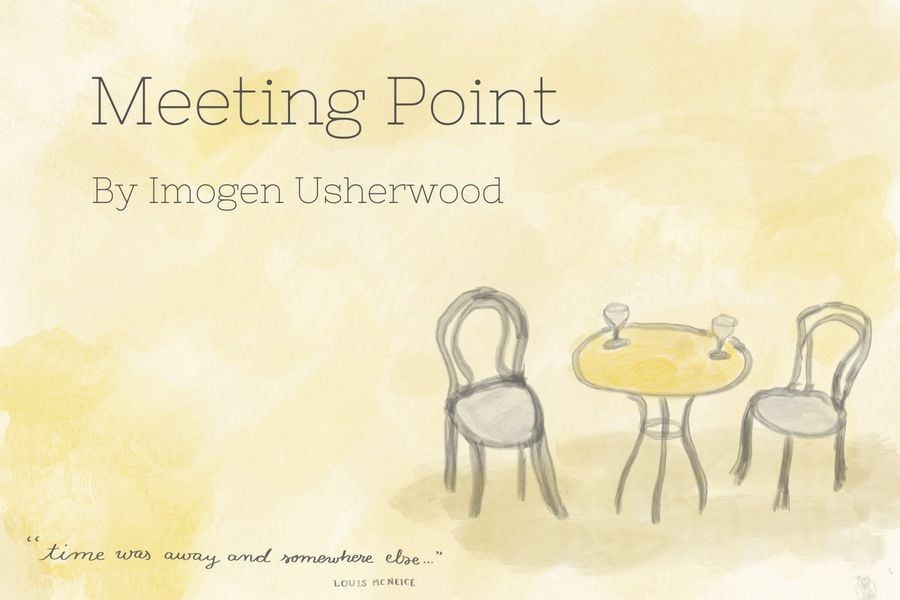 Molly Kavanagh is excited and intrigued by the skilled writing, excellent direction, and promising performances of Imogen Usherwood’s ‘Meeting Point’, as released in previews.

Yet again with the privilege of watching any of Imogen Usherwood’s work in DST, I was excited for this taster of her play’ Meeting Point’, premiering as a series of short clips at DDF 2021. Usherwood’s writing did not disappoint. Her words are honest, and dialogue is wonderfully every-day, yet throughout there is still a command on the audience’s attention. The clips have certainly succeeded in creating an intrigue into a show which I would look forward to seeing in full when the situation allows.

First of all, I esperately wished the scenes were presented in a slightly different order, as the first clip did not necessarily accurately set the tone of the show. The exchange with the quiz-voice did feel a little too farcical for the truthful realism of the rest of the clips. While Helena Baker’s voice from within the computer did succeed in being comically irritating, it was distracting from Hatty Tagart’s first appearance as Sadie, and often took away from itself and the meaningful questions being asked.

Tagart’s best moments were in her monologue of the second clip. Her pacing was varied and well-considered, adding interest to her delivery. Her body language and use of gesture were never over-done, as can often be the case when adapting from live theatre to film, but wonderfully naturalistic. Similarly, the acting behind her eyes told the audience more about the character. Even from these clips, we started to understand who Sadie really was, which complemented the intimate writing beautifully. However, I would like to see Tagart let the thoughts further develop in front of the camera. It could appear that the character already knew what they were going to say next, pre-empting the next line, rather than discovering the ideas for the first time. The direction of the end of the scene was simple but incredibly impactful and rounded off the clip well, but again I would have liked a moment here to take this in before the next scene began.

Tom Cain’s monologue as Matt was a refreshing change of pace in the overall show, and I was disappointed that his character did not feature more in an otherwise Sadie-heavy selection. The way he directs his delivery and (lack of) eye contact added to the nervousness of the character and was a well-suited choice for the screen. I initially found that Cain’s use of breath was a little overdone, and this energy was perhaps too high at the start of the clip, meaning that it felt there was nowhere for the scene to elevate. However, this became more balanced as the scene progressed, and Cain’s delivery more honest. He shone most in his calmer, more considered moments, allowing the pauses to settle whilst portraying Matt’s confliction beautifully. The writing here allows Matt’s thoughts to develop naturally, and the contrasting weight of his different feelings creates an incredibly truthful internal conflict that ebbs and flows throughout the scene.

On the first watch, the clips are slightly confusing, and I did need to watch them twice more to truly get a feeling for the characters and an idea of the story as a whole. Similarly, the editing was very abrupt: it often didn’t give the audience time to digest each clip before we were thrust into a new and contrasting atmosphere on screen. Perhaps a short blackout would have worked better here to allow the clips to settle.

The final scene rounded off the collection nicely. It gave just enough to leave the audience wanting to know more. The realistic exchange of overlapping dialogue was flawlessly directed by Usherwood and co-director Hugo Millard, creating a humorous observation of a therapy session which allowed Sadie’s struggles to hit with even more depth. Tagart’s awkwardness was well placed, and it was clear that she had a real understanding of how Sadie worked. I cannot fail to mention Sean Alcock as the star of the supporting cast who was utterly believable in his role as the therapist: never taking away from any of Taggart’s choices, but focusing on her character intently to complete the scene.

Overall, Imogen Usherwood’s ‘Meeting Point is a truthful, intimate and real piece of theatre, looking insightfully into our digital reality and the relationships we can forge from it.

‘Meeting Point’ is available to watch from the Durham Student Theatre Youtube channel. The production is sponsored by 12 South Theatre Company.

More details of all DDF plays can be found on the Durham Drama Festival section of this website, this First Night news article and the DDF Facebook page. Find out more about the inspiration and craft behind ‘Meeting Point’ in Imogen Usherwood’s writer’s note.