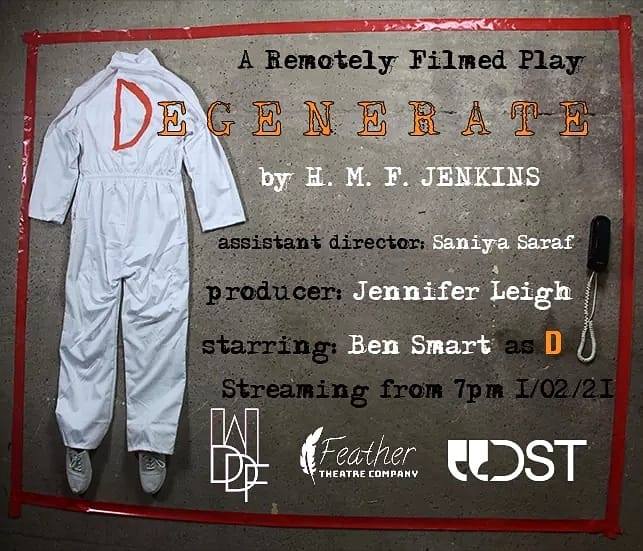 Jodie Sale is unsettled and captivated by H.M.F Jenkin’s one-person show ‘Degenerate’, a jolting exploration of freedom, observation and truth.

Degenerate is a piece of theatre you’re not sure you should be listening to – let alone watching – and yet you can’t look away. I was certainly glad I didn’t.

Feather Tree Theatre Company strike again with another visceral, unhesitating student-written play powered by Ben Smart’s charismatic man-on-the edge performance. After opening night, it is clear that DDF is as strong as ever in its new online appearance.

Smart harrowingly brings D to life: they are someone we know painfully little about, who can’t keep themselves subdued under the pressure of observation that we as an audience provide. Director and writer HMF Jenkins skillfully gives us insight into an inmate’s psyche, but with his searching questions and unstable wordplay, it becomes uncertain who is asking the questions in this hour-long interview where only D provides the dialogue. It is hard to decide if he is the subject under study, part of the ‘test’ Jenkins sets up, or you are.

Audiences watch Smart pulsate against the sloped walls of a claustrophobic cell pressing down on him. We feel his energy push against this pressure. He has a burning desire to cross ‘the line’ that keeps him in check and overcome the piercing phone that forces him to retreat away from us, at times cowering animalistically in a truly captivating performance. In this way, Director Jenkins and Assistant Director Saraf bring alive such a small stage space. It feels like you are watching D through a CCTV camera, a camera D knows is always watching him. Videography is brilliant in that it follows him; the lens moves with D to assure he never gets out of sight. The whole play explores what it means to be monitored, watched, and observed. Smart’s acting and Jenkins’ writing make it feel like an intimate conversation that’s taking place in the same room as you – we could almost have been at the theatre after all.

Jenkins’ masterful writing means every word spoken is unstable; words like ‘dangerous’ and ‘degenerate’ resist definition through nuanced wordplay. What D says is constantly under review and deeply entrenched in censorship – something Smart makes evident through carefully timed corrections, and jolting shifts in tone and mood. Nothing sits comfortably. Ben has it so that things just slip out. Smart’s constant correction of himself, fearful glances and self-punishment are just a few ways that he demonstrates effortless acting prowess.

Perhaps Ben at times could have shown us all stages of D’s thought process, taken more time to muse over words he’s meant to be really thinking about, and relax into the room to which he has seemingly become accustomed. Occasionally he seemed in a hurry, jarring with the time he has with us and the details he goes into. That said, watching Jenkins’ Degenerate is beautifully unnerving, as you, the viewer, are continually confronted and questioned by Smart’s searching gaze, uncomfortably matched with his generous laughter, gleefully told anecdotes and charismatic self-deprecation.

Jenkins’ Degenerate is uniquely and boldly aware of its audience; it gives us clear instructions from start to finish, always from D, that he is ‘not to be pitied, not to be identified with’. It also employs the lovely motifs of the line across the stage and the use of the dictionary. Perhaps the script at times seemed a little stagnant, not moving anywhere, as very little new information about D was dropped. At these moments, Jenkins relied on Smart’s built-up relationship with his audience to pull us past some dry patches.

However, any production team that has managed to put together a well-polished and rehearsed, visually appealing production with striking costume and scenery, and release it to the world under the pressures, challenges and uncertainty of a lockdown is outstandingly impressive. `

If you want to be pushed to the edge of your comfort zone, from the safety of your comfort zone at home, then this is a free one-man-play that will unsettle your own definitions of freedom and transport you into the world of an inmate you hope is far removed from you.

Degenerate is available to watch from the Durham Student Theatre Youtube channel. The play is sponsored by Feather Theatre Company.

More details of Degenerate and DDF plays to come can be found on the Durham Drama Festival section of this website, this First Night news article and the DDF Facebook page.