Kate Pesenti revels in the majestic power-play of the National Theatre’s Amadeus, the last production in their live line-up.

Once you have watched Amadeus, you can understand why it was chosen for the National Theatre’s last screening. It is an unashamedly dramatic saga: a hotpot of sex, revenge, power, courtiers dragged across floor and Mozart’s Symphony 25 in dubstep. There is little place for nuance, and its exaggeration can sometimes lead to satisfying cringe but, overall, it is undeniable that director Michael Longhurst has delivered an electrifying production.

The plot is simple: a tale of the devastating jealousy that corrupts court musician Salieri, its cause being the unprecedented genius of Wolfgang Amadeus Mozart. Together they know that Mozart is the best musician in Vienna, perhaps the world, and it is this knowledge that only they share that will destroy them both.

Lucian Msamati is a mean force as Salieri. As our eyes and ears to the court, you will notice that he makes sure to always play to the audience. Msamati makes the wise decision not to vie for our sympathy but, perhaps, reach instead for our understanding or even complicity as we watch him slowly unleash his awful plan. He effortlessly transforms between the familiarly grouchy old man to an arrogant courtier and, later, figure crushingly defeated in the face of his own mediocrity. He takes us with him every step of the way, his performance consistently and utterly believable.

Fuelling the dynamic is the exceptional performance of Adam Gillen. His Mozart is grating, sometimes even painful to watch – as it should be. He prances about the stage in his pink docs, perfectly conjuring up the image of the worst child you have ever had to babysit. At times, the script does limit his performance. Mozart is the embodiment of infantilism, and as a result, the audience never gets to see the same depth of character as we do with Salieri. Yet Gillen still manages to gain our sympathy despite his whiny, slappable pitch, a result which is truly a strong testament to his skill.

The cog that most ties the production together is the ensemble, comprised of an extremely talented orchestra and operatic singers. The lifeblood of Amadeus is sound and, crucially, the music: from the opening whispers of ‘Salieri’ to the gross background noise of licking fingers, the use of sound formulates an atmosphere that no actor could single-handedly recreate. One of the most powerful moments of the show is a musical display of Mozart’s talent in the face of a crushed Salieri. Combined with blinding tech, it is a genuinely haunting scene and so expertly choreographed that I hit the replay button multiple times to relive its dramatics. It is just such good theatre.

Special notice also has to be paid towards the set and costume design. In its extravagance, it is exactly what you would expect but constructed exceptionally well. Pillars and tapestries come and go; the costumes are alight with colour; and, altogether, it perfectly creates the image of a Viennese court. My favourite element is the raised platform, which transforms from a modern-day gig stage to a throne room and back again. It is a subtle reminder of a central theme of legacy and what connects us now to the eighteenth century.

Overall, Amadeus wears its drama unapologetically and forces you to go along with it. It’s sexy; it’s brash; it quickly goes from memorable one-liners such as ‘too many notes’ to the distressing cries of the utterly defeated. It treats decline with a bright bang; a perfect end to the programme which has highlighted the struggle of the theatre industry over the past few months. Watch it and, more importantly, donate. We need to make sure that we have more productions like Amadeus in the future.

Amadeus is available to watch until 7pm on Thursday 23rd July on the National Theatre’s YouTube channel.

All image credit to Marc Brenner and the National Theatre. 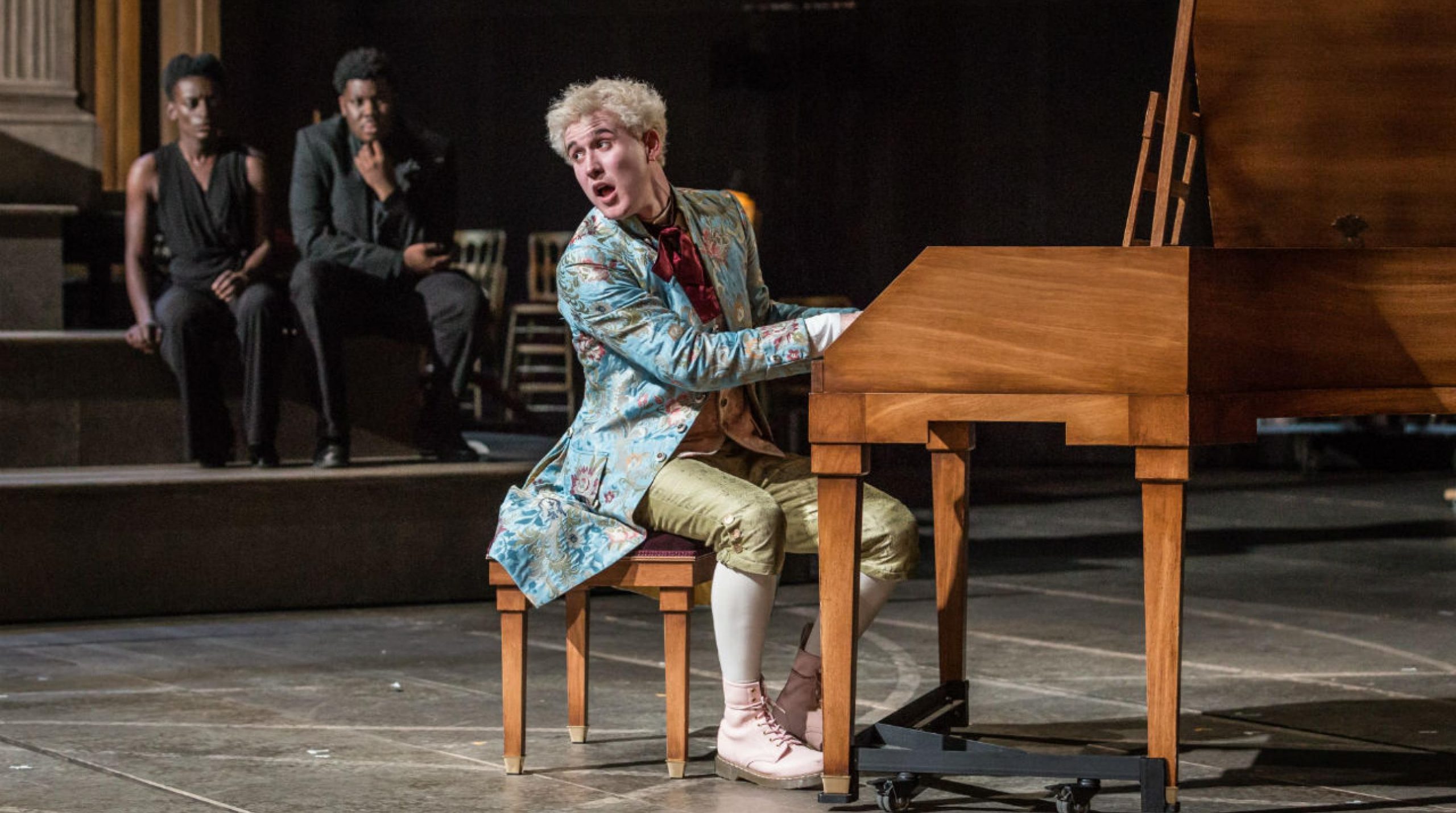 Lucian Msamati as the scheming Antonio Salieri, surrounded by a first-class orchestra and ensemble.