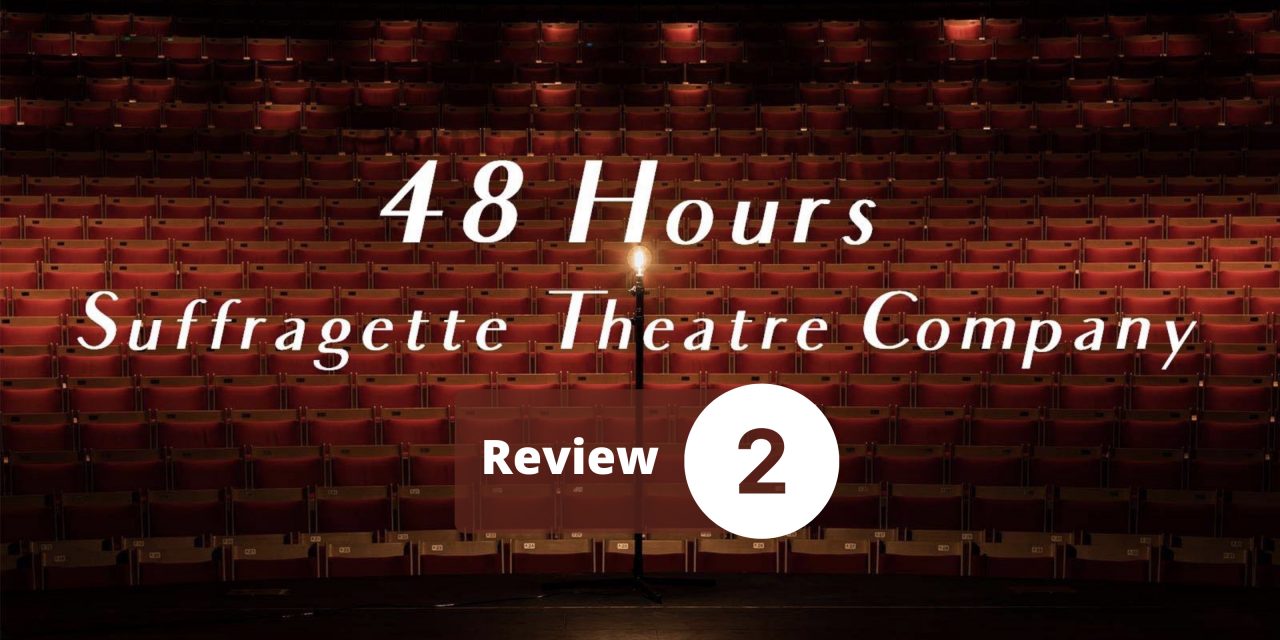 Sophie Tice is impressed by Suffragette Theatre Company’s rejuvenation of the the showcase model in ’48 Hours’, characterised by unconventional directing, smooth editing and talented performances

Most people are a bit done with showcases. Their indispensability for creating opportunities for theatrical engagement, development, and connectedness throughout the last year’s relative dearth, particularly for Freshers, cannot be underemphasised. However, dominating the field with audio drama as they have, it is inevitable that the format should become tired. Suffragette Theatre Company have responded by setting out an innovative challenge to the model. They gave seven actors – most well-known DST and Suffragette regulars – 48 hours to both act and direct a monologue. Each individual brought along the monologue of their choice, which they directed with another actor performing; the swap continues and the circle is completed. The result is a new celebration of the actor-director type (even actor-director-writer, as in Tom Murray’s case), challenging these students to reach new levels of creativity, collaboration, speed and versatility. In doing so, they have successfully injected new life into the showcase form.

The first monologue is the natural, metatheatrical entrance to the show, featuring Tom Murray as the skittish fictional director introducing a performance to come. Murray’s scrunched face, trembling hands and failed hipster wardrobe wonderfully embodies the wannabe-cool feeling of this pitiable, adorable man, attempting at all costs to remain positive despite his theatre group’s dismal record. I immensely enjoyed the fun, referential swap of their names in one line, replacing the calamitous ‘Cornley Polytechnic Drama Society’ of the original play with ‘Suffragette Theatre Company’. Glorious irony is added to this by the sense that, especially in an obviously limiting time for theatre throughout this year, Suffragette has seemed to thrive.

Georgia Laird gives a delightfully snarling, sarcastic performance in ‘Hangmen’, directed by Ben Smart. A minimalistic look was obviously chosen deliberately, black clothing, white wall and shadow in place. However, I wish there had been something extra to add excitement to Laird’s nevertheless engaging performance. The bareness seems hardly to reflect or memorialise the character’s stylish, coy criminality. On a second viewing, I found myself desiring something closer to the bizarre yet highly enjoyable choice to set ‘East’, another criminally-minded monologue appearing later, in an ambiently-lit bathtub. I did, however, adore the bold use of eye contact; changing glances allowed the character to directly address the audience and make them a participant, not merely a passive observer, in their interaction with the monologue.

I was utterly absorbed by Ben Smart’s performance in ‘Love and Money’, brilliantly directed by Laird. The choice to film the monologue from above, with Smart lying sideways to the camera and looking up from a bed below, is fascinating. I initially found this style disjointed and contradictory to the tone of the monologue. While Smart is conversational and relaxed, the audience cocooned in a bubble of familiarity, the birds-eye-view of the camera seems to impersonalise our interaction with the character: we are unnatural observers, as if looking on CCTV, peppered by an urge to turn our heads and watch him from a more natural angle. Though never obviously rational, the effectiveness of the technique becomes clear further into the monologue and certainly on a second viewing. Its exact strangeness helps to keep the audience engaged. Moreover, its camera is constructed to be unconstructed: the viewer is not positioned in any realistic way to the character and therefore our eyes are allowed to roam, much like on stage, and imagine ourselves to be any number of people to whom the character might be talking.

Miriam Templeman is a particular marvel in ‘August: Osage County’, directed by Aarnav Tewari-Sharma. Contorting her face, sticking out her chin and angling her head like a humanoid dinosaur, she becomes utterly entrancing in the unlikeable guise of a bitter older mother. As she spit, shouted and spewed her claims, I lost the sense that I was watching an online performance. I felt like I was in the room with the character, embodying the children on the receiving end of this volatile condemnation. If I had to give out a single acting award, amongst all these brilliant performances, I would choose Templeman as the recipient.

The most unconventional monologue and my personal favourite have to be ‘About a Goth’, starring Aaron Rozanski and directed by Alexander Cohen and Aaron Rozanski. The standard method of monologuing – speaking and moving your face at the same time – is replaced by an incredibly innovative alternative: a deliciously mopey, bitchy recorded voiceover on a video of Cohen making exaggerated facial expressions, reflecting the character’s thoughts. We are truly inside of his head. It is darkly comic, as the moral repugnance and vulgarity of the speech is combined with the cartoonish familiarity of the facial expressions. The blue light in which Cohen is bathed reminded me of Insight Out, a wonderfully obvious reflection of the sadness and hatred in which the character indulges. One is unsure of entirely how to react, but laughter is inevitable.

This memorable duo swap roles in ‘East’, with Cohen directing and Rozanski performing. Although their second attempt cannot match the inventiveness of ‘About a Goth’, I admire their consistent efforts to make the most of their virtual circumstances: not only filming what would have been a great performance on stage, but making use of the camera and post-shoot editing abilities to improve it. The close, intimate set-up gives an intriguing sense of confidence, reminiscent of the 4th wall breaking in TV shows such as Fleabag. Increasingly, however, one becomes uncomfortable with this connection, disgusted by the pre-agreement his character assumes from you with his anti-semitic nationalism. In particular, Rozanski as Sound Designer gives extra attention to his own monologue with great success. The dripping water is melancholic, reflecting the likewise neglected East End of which the character is part, while acting as a drumbeat to a triumph that never comes.

Tom Murray opens and closes the showcase, first performing and now having written and directed ‘Icons’. Unfortunately, this is the monologue about which I have the most mixed feelings. Aarnav Tewari-Sharma’s performance is mostly soft and conversational, perfect for speaking nostalgically to his children. However, at times, it seems artificial, as though he is reading from a children’s book rather than thinking the words at the time he is saying them. Like likewise, attempts at tonal shifts and louder moments, such as the cry of “Who do they serve now?”, sometimes appear out of character, like specific efforts to introduce variation rather than such variation growing naturally and appearing realistically. Most of all, the camera is too close to Tewari-Sharma’s face. Tewari-Sharma makes emphatic use of his hands while acting. Unfortunately, this becomes annoying as his hands jump and blur in and out of the screen throughout the performance, distracting from the facial emotion I assume was the reason behind the close-up to start with. Nevertheless, there were lovely moments, particularly when the character directly discusses his wife with genuine, subtle emotion. Moreover, I enjoyed the reflection of this enchanting nostalgia through the black-and-white recording.

As should be clear, the monologues vary greatly in staging, setting, style and content, each being directed by a different individual. Thankfully, we are saved from any disjointing or distracting transitions by Olivia Swain’s polished video-editing. The elegance and style of the introduction perfectly mirrored Suffragette’s characteristic black-and-white graphics on social media, while the transitions were perfectly smooth.

Overall, this is a fantastic piece of theatre. I cannot commend everyone involved enough for lifting such innovation, creativity and collaboration out of the unproductive sameness of lockdown. I hope that even when more traditional modes of theatre, with audiences and a stage, are once again legalised, that projects such as this continue. I have now watched some pieces over five times, and it won’t be long before I am forcing my housemates to do the same. For everyone out there who is deliberating whether to watch, this production is free, half an hour long and utterly brilliant – what are you waiting for?

’48 Hours’ is free to watch and available to stream until the end of Tuesday 2nd March. Find out more on Suffragette Theatre Company’s social media.