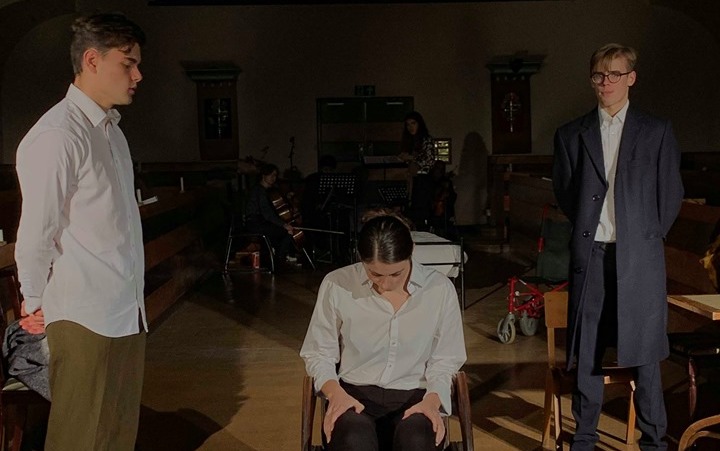 Castle Theatre Company’s first night of Regeneration offered a touching portrayal of the aftershocks of the lives of soldiers during the Great War. Not only did it explore important themes of sexuality, masculinity and mortality, the company did so with maturity and truthfulness which was poignant to experience. The play invited us to live the lives of the soldiers in Craiglockhart Hospital: the audience gained insight into poetic giants such as Siegfried Sassoon (Oscar Nicholson) and Wilfred Owen (Harrison Newsham), working-class soldiers such as Billy Prior (Daniel Vilela) living between his inner and outer world, and the sensitive Doctor Rivers (Ned Vessey) overseeing their treatment with dignity and humanity.

The production is performed in Bede Chapel, at the College of St Hild and St Bede. It is ominous, dark and cold – the audience really do feel as if they are in a hospital in the highlands of Scotland. The performance immersed the audience within the story before it began, with the soldier Willard (Olly Stanton) barking orders as we walked in. The cast were emerged in the pews of the Chapel, using space and the area exceptionally well to bring Craig Lockhart Hospital to life. Nicholson’s Sassoon was placed in the centre of the space in sterile light, surrounded by four medical judges in the darkness of the pews determining his fate. This hostility was recreated nearer the end with Vilela’s Prior too, reminding the audience of the routine helplessness facing soldiers as their lives are physically taken from them.

The company not only used the space of the Chapel innovatively, but movement and physicality too. In moments using a pink light, an omnipotent force that revealed the inner suffering of the soldiers, the cast were seized by forces beyond their control, their own illnesses. Anderson (Alana Mann), Campbell (Grace Brimacombe-Rand) and Callan’s (Maire McGovern) experiences of this were remarkably interpreted by the actors. The actors effectively conveyed the unliveable turmoil and suffering the men were enduring, and this unthinkable experience was made visible by the exceptional movement of the cast. The movement director, Alana Mann, should be especially praised for her unique insight.

Equally, the musical ensemble brought the performance to life even further. During a medical procedure verging on torture to ‘cure’ a soldier’s mutism, the effects of the increasingly faster screeching of the instruments made it all the more horrifying. Tom Pyle’s performance as Dr Yealland, and his malevolent nonchalance throughout this traumatising procedure, coupled with Burns’ (McGovern) own expressive physicality throughout, were examples of not only excellent student acting but the director’s treatment of such a sensitive area of history with tact and maturity.

The performance was all the more impressive to the audience for their interpretations of the major themes of sexuality, masculinity and mortality in the play. Wilfred Owen and Siegfried Sassoon questioned their own feelings of admiration and desire for one another in the light of their shared poetic insight. Their editing and reforming of  Wilfred Owen’s ‘Anthem for Doomed Youth‘ throughout indicated the sensitive nature of their relationship which allowed them to explore the morality and mortality of not only the Great War, but their inner conflict too.

Vessey’s Rivers was played with a subtle thoughtfulness, he unified the characters and tied up their loose ends, particularly visible in his relationship with Prior. An absolute favourite moment was Prior’s hypnosis by Rivers – for the first time the audience truly saw this comedic character for who he really is, a man in unbearable pain. Vilela’s acting was sublime. He exemplified the performance’s message of not only the horrors of what we can do to one another, but the essential humanity needed to repair such unthinkable trauma.

Regeneration really is a must-see. It is an exceptional example of student acting, directing and production, especially considering much of the cast are in their first year at Durham. The poignancy of the performance cannot be understated – especially considering this touching production is taking place in the month of Remembrance, 101 years after the end of the First World War. I would not hesitate to give it five stars.

Regeneration will be performed at Bede Chapel on 16th and 17th November at 7pm.