Rowan Evans heads to the intimate venue of Cafedral for a night of disturbingly dark comedy. 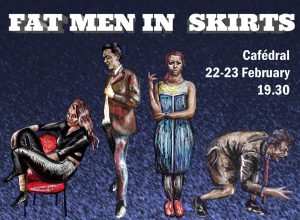 In Fat Men in Skirts, directed by Ginny Leigh, Aidan’s College Theatre taken difficult source material and shaped it into a compelling, if disturbing, production. Written by Nicky Silver, it follows four characters, exploring what makes them who they are and do the things they do. It contains themes of murder, cannibalism and incest: it is not for the faint-hearted. Though it suffered from initial pacing issues, the production settled into itself throughout the night.

The venue chosen for the production was tight to say the least. Cafédral was packed on one side with two rows of chairs while the other side was reserved for the stage. I wasn’t keen on the location at first, feeling slightly squashed. Being in such a tight space, however, ended up being an advantage for this particular production. The actors being in such close proximity to the audience created an uncomfortable, intense atmosphere. Often, they would break the fourth wall, staring directly into your eyes, which heightened the sense of nervousness.

The set design in the production was minimal. This was suitable for the venue but at times meant that the sense of space was not portrayed that well. This was reflected also in the lighting, although I appreciate that the production team probably made the best of what was available in a small coffee shop.

After the first half of the play I was unsure of what to think. The actors were still settling into their roles and the performance was a little stilted. Nevertheless, by the time of the second half, those doubts were thrown out of the window. The performances came to life, the pace picked up, and by the end I was left feeling breathless.

The actors should be commended for their unrelenting energy in such a difficult space in which to work. Savy Des-Etages’ portrayal of Phyllis was and dominant at first, but expertly collapsed in on herself to the deranged, passive figure found at the end of the play. Joe Sherlock as Bishop brought an intensity to his performance which at first seemed a little overplayed. This, however, erupted into a standout performance of the night, owing to his ability to tower over the actors and audience in a terrifying way.

The transitions between scenes could have been smoother but this fell by the wayside after some first half hiccups. The direction of Ginny Leigh shone in the uncomfortable juxtaposition she was able to make between different states. One second the audience would be laughing at the coy threats of violence coming from Bishop, the next second stunned into silence as he enacted this violence in ferocious manner.

I would add that this play will not be for everyone, and contains strong uncomfortable themes throughout. Despite this I think it is best to go and experience this play with as few preconceptions as possible. It is a unique experience, uplifted by the energetic performances throughout.

Fat Men in Skirts will be playing in Cafedral at 7:30pm on the 23rd February.