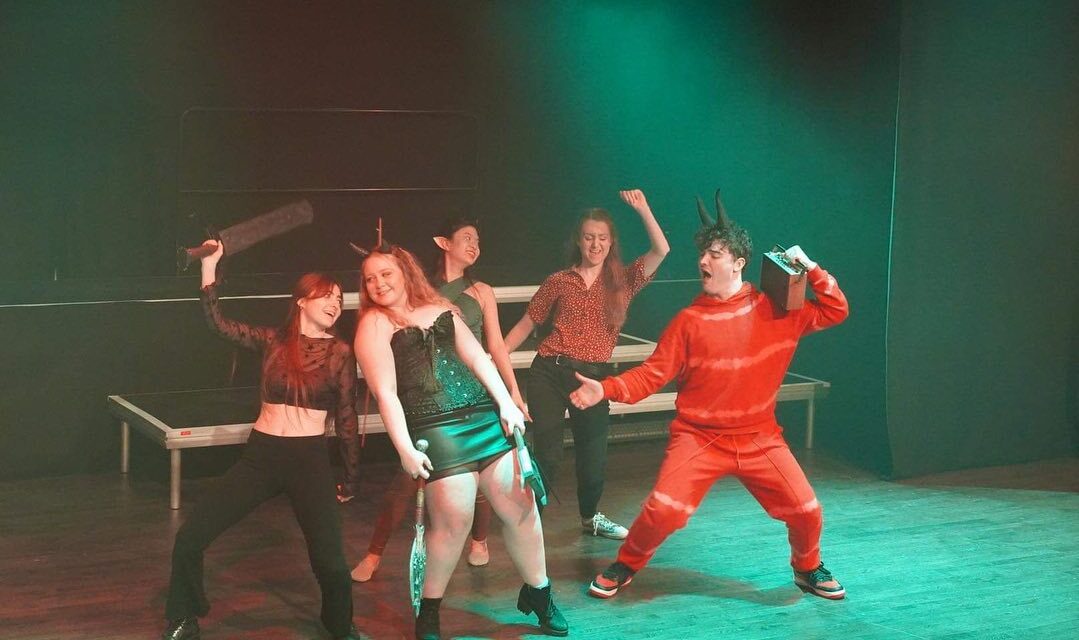 I have seen no other play so excellently combine silliness and seriousness as ‘She Kills Monsters’. It is a story of finding community in otherness amongst prejudice – but also features a five-headed dragon and vampire cheerleaders.

Being queer in 1990s Ohio (and today) could be an emotional and alienating battle, as LGBT+ people are separated from their loved ones through homophobia, ignorance and the law. In ‘She Kills Monsters’, the characters find an alternative community through Dungeons & Dragons. They create the world they want to live in, where everyone is accepted and can be themselves. Qui Nguyen, the playwright, has been nominated for two GLAAD awards, honouring fair, accurate, and inclusive representations of LGBTQ people and issues. Though open to everyone, FHTC is the college theatre company of St Mary’s College. Last year, the hate crime against Mary’s LGBT+ society made national media. This is the prime reason FHTC have been glad to tell LGBT+ stories this year and particularly welcomes this exploration of love, acceptance and difference.

Equally, ‘She Kills Monsters’ is a hilarious and geeky play. It features dance battles, a fight montage to Return of the Mack, a dark elf and demon queen, lots of cheese whiz and twizzlers, gigantic swords and tons of general sexiness. The design team created incredible monsters for the show, from a giant eye, a five-headed dragon, and a humanoid gelatinous cube. Yes, you read that correctly. If you do not know Dungeons & Dragons beforehand, you will be in the same position as the central character; it is not a problem but rather an opportunity. Is a bugbear a bug or a bear? Neither – but watch on to find out more. ‘She Kills Monsters is equally silly and meaningful’. We have spent this rehearsal period both laughing and crying, as I have every expectation of the audience mirroring during each performance.

Casting this show was tricky. The play is set in two worlds, the “real world” and the D&D world, within which the characters reflect the image their equivalent wishes they could be in real life, free of their insecurities or societal pressures. Many characters often have shifted personalities in each world, requiring significant acting range. It’s one thing depicting a grief-stricken closeted teenager; it’s another depicting a sexual, flesh-eating goddess alongside them. I feel so lucky to have the incredible cast we do, who have all worked so hard to make their characters as authentic, hilarious and meaningful as possible.

The play is personal to many cast and crew members, perhaps most, given its themes of LGBT+ identity and grief. After rehearsing one emotional scene, I was amazed by the tangible heaviness in the air. Everyone had tears in their eyes, and no one spoke for about ten seconds; the atmosphere needed to dissipate. Afterwards, the four of us hugged and did some group breathing, sharing and leaving behind the energy of the rehearsal before entering the actual real world. The closeness and vulnerability of that hour were unlike anything I had ever experienced before. In this moment and many others, I am so grateful that there has been such an earnest atmosphere of support and love among the cast and crew.

One unusual aspect of ‘She Kills Monsters’ among DST is the combat. Monsters mean fighting – it’s in the name. Luckily, we have the genius, Ella Al-Khalil Coyle, in our production team as Movement Director. Ella never fails to make every combat session fun, safe and comfortable. In our first safety workshop, we developed a tradition of group-clapping every time someone tried a shoulder roll; it turned something that was potentially exposing or nerve-wracking into a celebration of trying. Many cast members let us know of their nerves at some movement form, from being lifted in a cheerleader formation to visibly dancing in front of others, who have since remarked that their confidence levels have blossomed during rehearsal. Enjoyment should always be the primary objective of student theatre, which is an attitude we have strived to maintain even during an intensive rehearsal period.

The technical aspects of the show were something I was excited about from the beginning. I have never read a script with such a specific technical focus, which Rhiannon Morgan and Jacob Marshall have brought together with fantastic drive and creativity. The sound effects Jacob has magicked are eerily realistic – watch out for that cheeky arm rip – and Rhiannon’s lighting design has transformed the stage with colour and personality. All Mary’s alumni, a quick note: I would be grateful for a similar multi-million-pound investment into our technical facilities as Collingwood. Thanks must go to Michael Crilly for supporting us in using the space so kindly and helpfully.

The work of the design team, led by Anna Hayward and assisted by Matthew Fackrell and Rosie Haffenden, has been time-consuming and struck by numerous external obstacles. However, these have been overcome to create the most impressive of monstrous results. The imagination and dedication these individuals express are consistently marvellous to ‘behold’ (please place this reference after watching the show). Jacob’s enthusiasm is infectious, and Bethan’s artistic skills are magnificent from our producing team. The stage management team, led by Dylan and assisted by Laetitia and Carrie, have worked incredibly hard and creatively to ensemble the weird and wonderful range of costumes and props required. Let’s not start on Naoise’s ability to do it all: her chat nickname is “movebeariproducheerbug” because she encompasses cast (Bugbear & Cheerleader), Assistant Producer and Assistant Movement Director, managing to all perform roles excellently.

Last but the opposite of least, I am grateful for my incredible assistant director, Esther. Esther shows up every time, everywhere, with kindness, ideas and enthusiasm; I cannot imagine a better person in her position. Unfortunately, another cast member, the remarkable Zara, and I have COVID as the run begins. I am so disappointed that all cast and crew cannot be all together for the first performance (and first-night curry). However, I am deeply grateful to Esther and Ella for leading the direction of production week like absolute Queens. I hope to watch the finished result later this week. In the meantime, please buy a ticket to the show and tell me how it is. I have COVID – it would be mean to say no.

Working with this cast and crew has been one of the most rewarding things I have ever done; it has been a true privilege to watch such a passionate group work and grow into their roles. I’m sad to see it come to an end but you can truly see the hard work everyone has put in and it will be a thorough pleasure to watch

Coming into this project I was particularly excited by the wide range of tech Collingwood has at its disposal. This allowed me to experiment with new and exciting effects including different types of haze and colour changing lights. The tech aspect of this show is immense and the experimentation allowed us to create drama with low lying fog and striking backlighting. The use of sound in this show is integral but comes with many challenges. My tech assistant Jacob Marshall went above and beyond creating some truly astounding sound bites to compliment the drama of the piece. Hopefully you’ll enjoy them as much as we do when you watch the show!