Preview: Days of Wine and Roses

Durham-based company Elysium Theatre are putting on their first ever production in their new incarnation as a Northern theatre company this week, right here in Durham Student Theatre’s very own Assembly Rooms Theatre. The play, Days of Wine and Roses, by Owen McCafferty, is a reworking of the screenplay and teleplay by JP Miller, which centres around a couple in New York and their alcoholism. McCafferty’s version transposes the play to London in the Sixties, where the two characters are Northern Irish immigrants. As Editor of Durham Student Theatre’s First Night, I was lucky enough to have the opportunity of meeting the play’s director and founding member of Elysium Theatre, Jake Murray, along with the cast: Alice Frankham, and Danny Solomon (also a founding member of Elysium), to find out a little more about the production.

When asked why Elysium has been set up as a Northern company, Murray responded: ‘there’s this huge reservoir of writing that’s never been seen up here [in the North of England]’ – something he is passionate about rectifying. McCafferty’s work, for example, has been showcased in prominent London theatres such as The National and the Donmar Warehouse, but the North of England can often be overlooked when it comes to introducing new theatre into its midst. Days of Wine and Roses, then, will open in Durham, before a week’s run in Manchester, and it will be the first time this play has been put on in either city. The theatre company are keen to work with other theatre-creating communities in the North, and part of their reasoning for choosing the Assembly Rooms Theatre as their opening venue was to connect with Durham Student Theatre – as it happens, a Durham student, Qasim Salam, was given the opportunity to gain some invaluable professional theatre work experience as the Assistant Director of this piece. In addition, Elysium will be offering all students involved with DST acting and directing workshops this Friday. 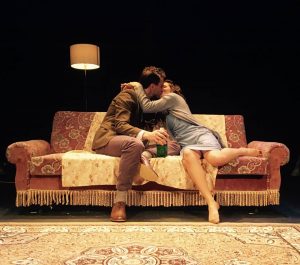 As for the play itself, Murray describes it as a ‘powerful, emotional, gutsy, big-issue drama’, the big issue here being the drinking problem which underpins the lives of the two characters. Mona and Donal are both young adults from Belfast who meet each other for the first time at the airport on their way to make new lives for themselves in London. Whilst undoubtedly and openly about drink, Murray is keen to stress that ‘the play doesn’t judge addicts at all; it deals with the reality of it’, and both the director and actors agree that the characters are ‘just people trying their best’. They are not ‘good’ or ‘bad’ people – as Frankham emphasises, the characters don’t necessarily subscribe to the binary roles of being stereotypically good or bad, man or woman, right or wrong: they are ‘just humans’.

Whilst both characters are Northern Irish, Murray tells me that McCafferty ‘never wants anyone to know whether his characters are Catholic or Protestant’, as he wanted the story to be about ‘ordinary lives as immigrants’, rather than the Troubles. This domestic ‘ordinariness’ can be seen throughout the play – Murray says that despite the key theme of the play initially being seen to be alcoholism, the rehearsal process has taught him that ‘every single scene is a love scene’. The raw and difficult subject matter is dealt with not by condemning it, but by focussing on two characters in love – not intrinsically bad people, but, as Murray puts it, ‘good people undone by their tragic flaws’

This raw, exciting drama will kick off the Assembly Rooms Theatre’s programme for this 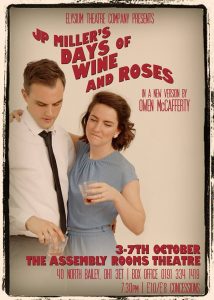 academic year, and I would urge students to attend both the production and its corresponding workshops – by the sounds of it, this is a high-quality, passionate piece of theatre, which is not to be missed.

‘JP Miller’s Days of Wine and Roses’ will be performed in the Assembly Rooms Theatre from the 3rd to the 7th October.  Tickets are available on the door or online at http://durhamstudenttheatre.savoysystems.co.uk/DurhamStudentTheatre.dll/TSelectItems.waSelectItemsPrompt.TcsWebMenuItem_0.TcsWebTab_0.TcsProgramme_342467