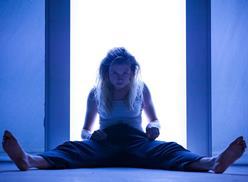 In addition to this, a theatre company set up by Durham Alumni in 2015, won 2 major awards. The company, Poor Michelle, was invited to take their show, Thick Skin to the festival where graduates Catlin McEwan and Ellie Gauge to perform in Hull and won prestigious awards.

The annual festival was held in Hull, as part of the City of Culture 2017 celebrations and featured 15 selected shows from student theatre companies across the country. The fact that 3 of those shows were produced and performed by Durham students is testament to the quality of those productions and the talents of our students.

The DST productions selected and performed at the festival were:

Supported by Battered Soul Theatre, directed by Alex Prescott and produced by Henry Winlow, Hidden is a darkly comic story of six characters, their secrets and the intriguing puzzle of how they interweave and unravel in a modern urban world. ‘Hidden’ peels back the skin and explores the inside.

DULOG are thrilled to have been chosen for the second year running to take their musical production, directed by Sophie Forster, produced by Gen Burns, to the festival. With equal doses of humour and poignancy, Ordinary Days is a musical that tells the story of four young New Yorkers as their lives intersect in their search for fulfillment, happiness, love and cabs.

Directed by George Rexstrew, produced by Gen Burns, Piccolo’s production tells the story of Anna who hasn’t left home for months; she’s stopped eating and she is smashing her flat up bit by bit. Rebecca is so furious with her ex-partner that she turns that anger on herself. Samantha is struggling to become Sam, to look in the mirror and really see himself, the real person inside.
Swallow powerfully tells the story of three strangers as they struggle with their lives. Painful yet playful, poignant but uplifting, this 80-minute contemporary play takes a long hard look at the extremes of everyday life, and the often chaotic ways in which we deal with them.

The NSDF was founded in 1956 by The Sunday Times and offers a week of professional led workshops as well as the opportunity to meet the top performers at other student theatre’s across the country. The festival offers networking with all the professionals and getting feedback and advice for working in the theatre professionally.