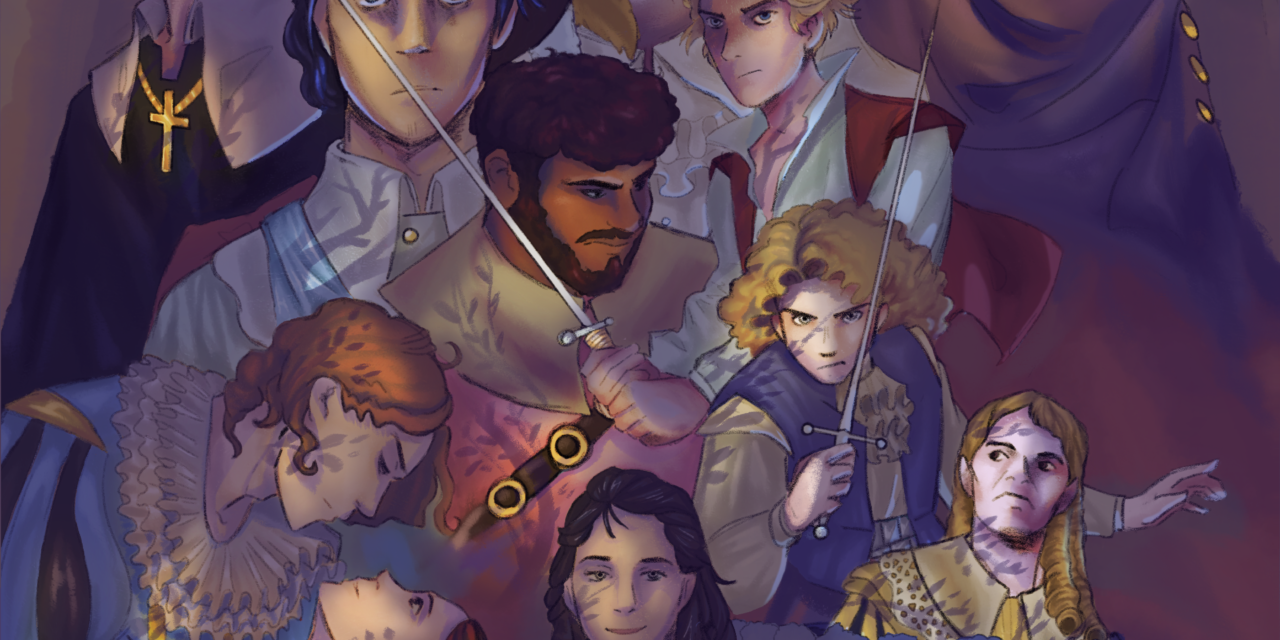 At first, I wanted the adaptation to help people enjoy this ‘classic’ without being intimidated by its status or length as I had been for so long. This seemed easy enough. But along the way, the writing team realized that Porthos and Aramis’ character development in the book did not… develop. Even D’Artagnan’s character pales in comparison to Athos’, who dominates the latter half of the book.

So we added character arcs to the to-do list.

Then there was Constance. Oh, Constance, Dumas did you so dirty in the end! Without spoiling the plot, we needed to fix Constance.

Then, however, including Queen Anne, only two major non-male characters remained, and Milady, an icon ruling over a good two-thirds of the book, doesn’t really arrive until after the season one cutoff. So we created Francoise, a fierce captain with an even more ferocious wit.

Hence came another addition to the list: scenes with this new character involved which didn’t contradict the plot.

Despite all this, we didn’t stray too far from the original this season, but we’re excited to see where we go off the rails further down the line.

Our show revolves around identity. Opposing forces create conflict for our characters: D’Artagnan between idyllic rural upbringing and urban realities; Constance between a sense of duty and desire for her own story; Porthos between French, Spanish and Moroccan identities; Aramis between the Church and the Musketeers; and Athos between his honour and a dark past.

Again, Porthos is a character both fortunately and unfortunately unexplored in the book – with almost too many ideas to choose from, the writing team had a field day with him. France’s vibrant multicultural society had actively engaged with Europe, the Mediterranean, and North African coasts since the Normans. We wanted to delve into this history, hardly touched as it is by contemporary literature. Porthos’ journey is one of finding pride in one’s identity, reflecting our writing team’s experiences of immigration and cultural identity.

Hopefully, you find 3M as entertaining as we do. I’m tired of cerebral, about-to-drown-deep, bleak pandemic media. I just want to be in the kitchen, weeping over my onions while I experience a thrilling horseback chase scene. Give me nail-biting political intrigue that isn’t real. Let me have to turn off the fan above the stove so I can hear an exchange of whispers between two people who don’t exist. Working on The Three Musketeers has been difficult, but if we can make one person’s heart race, if we can make just one person have to pause an episode in order to double over in a long laugh, that’ll be worth it.

The Three Musketeers is adapted from Alexandre Dumas’ 1844 novel by Jay Figueredo, Izel Ilkten-Salman, Sam Turnbull and Matthew McConkey. The first two episodes are available to stream on Purple Radio Arts and Drama on Spotify, Apple Podcasts and Google Podcasts, with the remaining eighteen episodes being released biweekly throughout Easter term 2021.