News: Much Ado About Blogging!

Much Ado About Blogging: Feature

400 years after the death of William Shakespeare, 16 thespy students set out once again to conquer the South with high hopes and minimal car space…

Bed, board and wine are generously provided by Mr and Mrs Theo Harrison in their lovely house in Notting Hill. Tristan Robinson’s costume is (astonishingly) too big for Mike Bedigan but this is quickly remedied by a trip to a nearby army surplus store. A dress-run of the show ensues in the garden with scones and pimms aplenty. Nicknames are dished out by Ellie Bowness, notes are given by Kate Barton and the evening ends with two monstrous lasagnes. Tour is declared well and truly on.

Arriving at the second venue; Great White End, a gorgeous traditional farmhouse in Buckinghamshire, there are four hours to kill before the show. The stage is set up quickly and the Wimbledon final is streamed on Abigail Weinstock’s mobile phone. Murray wins in straight sets and everyone is in a good mood. The first show goes very well in the walled garden despite some slight wind.  Everyone is greeted by our hosts and audience afterwards for drinks before heading back to Blackwell Farm. Jess Christy decimates a small hedge and gets lost in the process. Back at the farm Tom Harper expertly mans the dinner BBQ and the first official day concludes as a rip-roaring success-aroo. 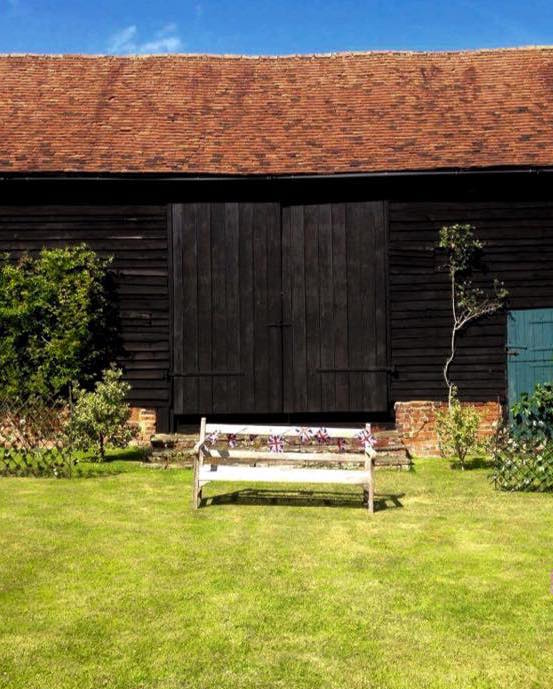 Packing up the cars becoming second nature, the cast set off to Suffolk for the third venue, Glemham Hall in Suffolk. But with a rainy start to the morning with sporadic showers of heavy rain meant that the second performance at Glemham Hall is forced inside a handy marquee giving the show an interesting and more intimate dynamic. The rain didn’t deter the audience, who came in their masses, laiden with picnics and deckchairs for the inside show! Post show drinks and an analysis of individual cast members’ home towns are offered by Major Phillip, the owner of Glemham.  A picnic style dinner is consumed inside the marquee and Alex Prescot produces a pair of undisputedly awful brown trousers. The trousers are to be worn every of the tour day by a different member of the cast who has committed a faux-pas of some description. They are firstly awarded to Jenny Walser who has become over-lairy due to tour hype.

Unfortunately the rain does not abate and the third show is staged inside Elstow Abbey, Bedfordshire, which, on the upside, improves the acoustics. Although the audience was small, the cast received the warmest of welcomes by our host John and his family, who had hand painted the poster themselves to advertise the show. Afterwards the cast enjoy free cakes and hotdogs then walk to a nearby pub in search of adoring fans. Sadly none are found. Later, after a few rounds of drinks and bantering, the infamous Elstow Abbey farmyard animals game is played. Leying Lee becomes the second person to don brown trousers after a misunderstanding over a banana.  Sleeping is done on pews and the next morning everybody wakes up just in time for coffee and Wednesday soup club. 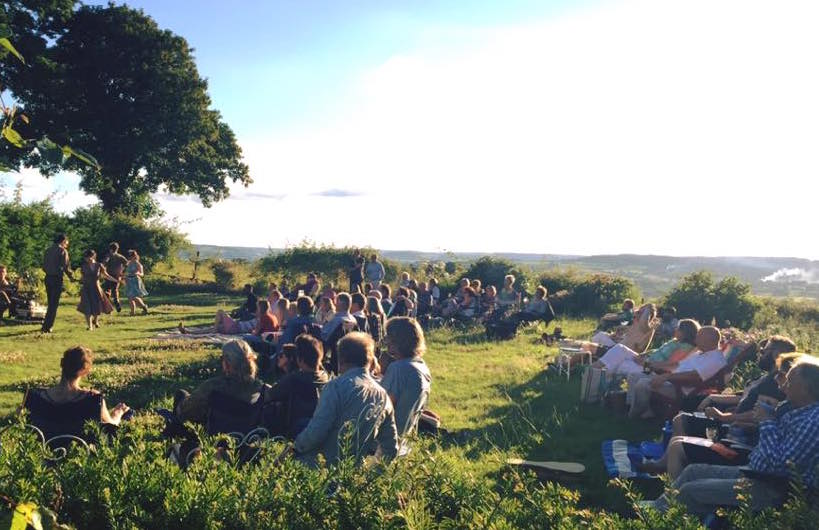 After driving through fields of wild, wild horses the convoy arrives at Beaulieu Abbey in the New Forest and the first erection of tents takes place. The sunshine holds and the outdoor summer Shakespeare tour becomes outdoor once again. In front of the largest audience of the tour, (approx. 200) comedy ensues once again and some slight artistic license is taken in the form of minor ad-libs and personal challenges. One remarkable audience member gives the cast a hand drawn diagram of the productions plot. A second picnic dinner is acquired from Tesco and small car parties are thrown that end early on account of everyone being shattered. The brown trousers are passed to Harvey Comerford for scaring Sarah Slimani by pretending to undergo an exorcism.

All play and no play makes CTC tour a dull place so a trip to Highcliffe beach is spontaneously organised. The entire cast engages in a splashy bonding session in the sea with Dominic McGovern’s enormous inflatable beach ball and a small pink Frisbee. Much fun is had by all. Returning to the Abbey the second show again goes down a treat despite a slightly smaller audience and a slightly sunburnt cast. Dinner is a divided affair, some opting for the third picnic dinner and some for Dominoes pizza. Revels are had in the marquee kindly offered by site staff and Alex Prescot is given the brown trousers for making insensitive comments. 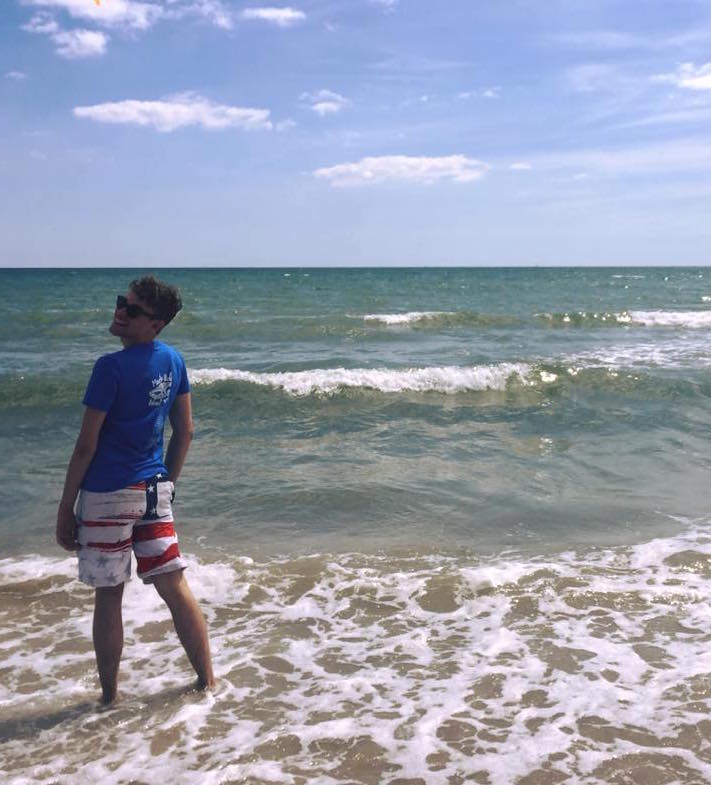 The sixth performance takes place at Ashley Manor, a beautiful grade two listed building in the Gloucestershire countryside. The weather is a little bit windy but pleasant enough and the audience are delightfully responsive. A wonderful carbonara is made and wonderful beverages are provided by the hosts. Much wine is consumed and the following day Theodore Holt-Bailey is dressed in the brown trousers for having only just avoided fouling the establishment.

Abigail Weinstock sustains not one but two flat tyres a mile down the road from Ashley Manor and subsequently spends most of the day replacing them. Her car eventually arrives at Mapperton Gardens with 5 minutes until the start of the show. Performance quality does not suffer in the slightest. A full cast curry is had afterwards in the nearby town of Bridport.  Standing justifications are given by Abbie and Sarah who both ordered korma. That night a spooky midnight walk is taken and ghost stories are told by Tom Harper though Georgie Franklin remains unimpressed. Shona Graham is made to wear the brown trousers on account of a joke she told in Beaulieu that was so terrible it still warranted the trousers two days later. 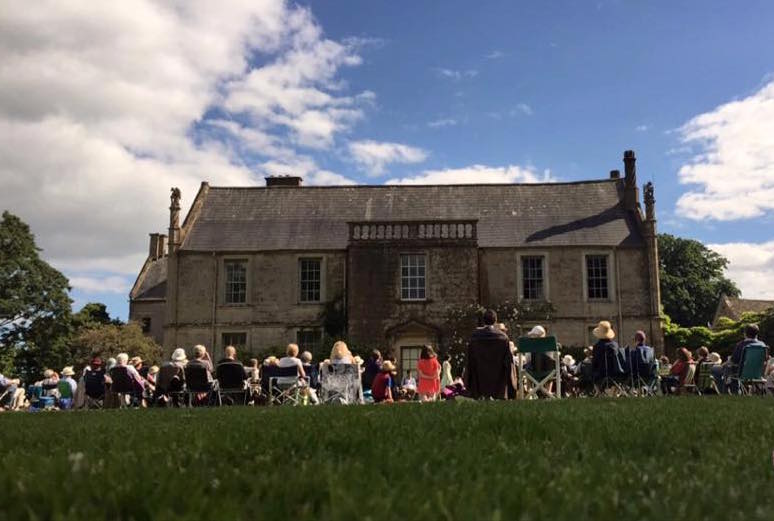 A packed day of two performances, matinee and evening! The Mapperton matinee is carried out with unwavering professionalism.   Thanks are given by the Earl of Sandwich but no actual sandwiches are provided.  The cast is disappointed but moves straight to an extremely picturesque B&B owned by Theo Harrison’s sister where sandwiches are provided. The cast are happy again. Camp is set up and a second evening performance is performed while the sun sets over the Dorset hills. Mike Bedigan messes up spectacularly in attempt at a witty ad lib and is immediately awarded the brown trousers. Burgers and a delightful broccoli salad are waiting for after the show and the penultimate night of tour passes care-free with many cast members sleeping under the stars.

The weather in Glastonbury is beautiful and the cast enjoy a final pub meal together.  People then split off in search of tarot readings and other magical items. With the Abbey providing a gorgeous setting, the final performance goes off without a hitch with the exception of Rohan Perumatantri‘s out of tune ukulele and afterwards photos are taken and goodbyes are said. Some cast members depart that evening but those that remain order Chinese food and finally go to sleep on tables in a nearby marquee to avoid earwigs.

The brown trousers are taken off and packed away for America…

The UK leg of CTC Summer Shakespeare tour finishes once again with the utmost success. Positive reviews flow from audience members and venue organisers alike and the entire cast are sad to come to the end of what is without doubt an all-round incredible experience.