First Night speaks to Frankie Haydon-White, writer and director of Hostage, a fresh exploration of friendship, health and addiction.

What is Hostage’s intention?

The show aims to shed light on topics that are so commonly experienced but little represented in the media or on stage. People often underplay just how damaging toxic friendships can be and the long-lasting impacts they can have, but the show fully delves into just how much this sort of experience can impact you. So often mental health issues such as eating disorders and addiction start in our teenage years, but I haven’t seen many shows that give an honest and realistic depiction of what it is like to be young and naïve and dealing with these issues. The intention of the show is to provide a space for these topics and experiences to be discussed and ask important questions such as who is to blame for these things starting.

The play explores what it’s like to feel completely powerless, trapped in a situation you can’t escape, and how you can create your own prison. You can be like a hostage in your own body when it feels like your own mind is working against you and you are stuck in a mentality you cannot escape. Addiction, eating disorders, and toxic relationships all create a sense of imprisonment that the show examines.

You have significant directing experience throughout your years in DST – how was it different to direct your own original show?

I won’t lie – directing a show so personal to me that I had written was a lot harder than I expected. It was sometimes difficult to differentiate in my head if I was giving direction because it was beneficial for the show or simply because it was how I imagined the show would be. On the other hand, it was so incredibly rewarding to see something I had written and only ever imagined in my head actually in front of me onstage.

How did you cope with the last-minute change to filming?

Having to change last minute to filming was, of course, disappointing. We were so excited for audiences to see the show live and having to figure out how to make the show work for film in just one day was extremely difficult and chaotic. However, I am also very grateful that we did manage to film it because it means people will still get to see it. I never imagined the show would make it to stage so to have it presented to an audience – albeit in a different format than expected – is still incredible.

How did you find the writing process?

The writing process was an interesting journey. It started with me writing my show (slightly intoxicated) at 1 am in my second term of first year. It began as a verbatim show with eight characters. After I finished it, I put it away and didn’t think about it again until a friend then asked to read it and gave me the invaluable advice to strip it back. I then began to convert the dialogue into a series of monologues and decided it work would best as a one-woman show. Next, I pitched it to Sightlines’ development programme and we began workshopping it. It soon became a two-person show and the idea of having two actors play the same person was formed. I also began to research addiction and eating disorders further and edit the script to take it away from my personal experience towards becoming even more of its own story. I find it incredibly interesting to see how different the show is from where it started, though I love the fact that we still have some of the monologues from the original script in the final product.

Do you have any tips for those who want to write and direct their own show?

My main advice would be workshop, workshop, workshop and be open with experimenting with ideas. Allow yourself to explore things that are away from your original vision because those bold choices could be what makes or breaks your show. I think one of the best things you can do is find someone to read your script and work on your show with you that you trust to give honest and constructive feedback. For me, that was my incredible Assistant Director, Ella Al-Khalil Coyle, without whom the show wouldn’t have happened.

What would you encourage the audience to be aware of before watching the show?

The play is based on one interpretation of one person’s experience and so won’t be accurate for every person watching. I want people to watch the show and feel connected to it but not come away and think that it invalidates any experiences they might have had. It is also important to note the show does contain sensitive themes of suicide, addiction and eating disorders so please consider your own welfare before watching and check out some of the resources Sightlines has posted on their Facebook and Instagram pages.

Hostage is available to stream from 7pm from Thursday 19th November to Sunday 22nd November. Tickets are available on the DST website, and more information and resources on the Sightline Facebook Page.

Below are some artworks by Shadow Director Anna Pycock, based on quotes and themes of the play. 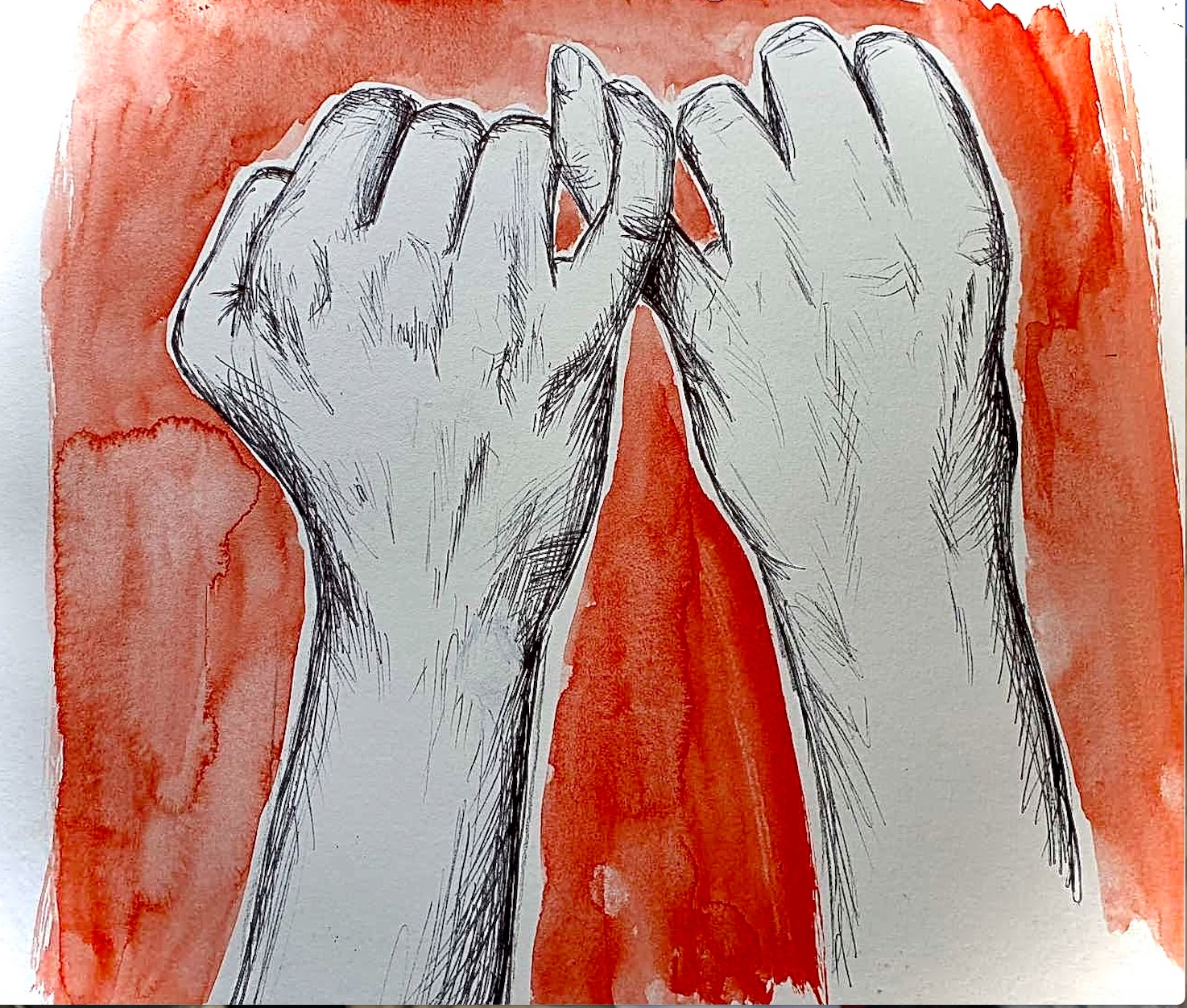 “She’s so incredible and so broken. Like me. We can be broken together”

“How many set out to die in agony, their body failing them, feeling guilty and shame and a mentality that would rather see death than another kilogram?”