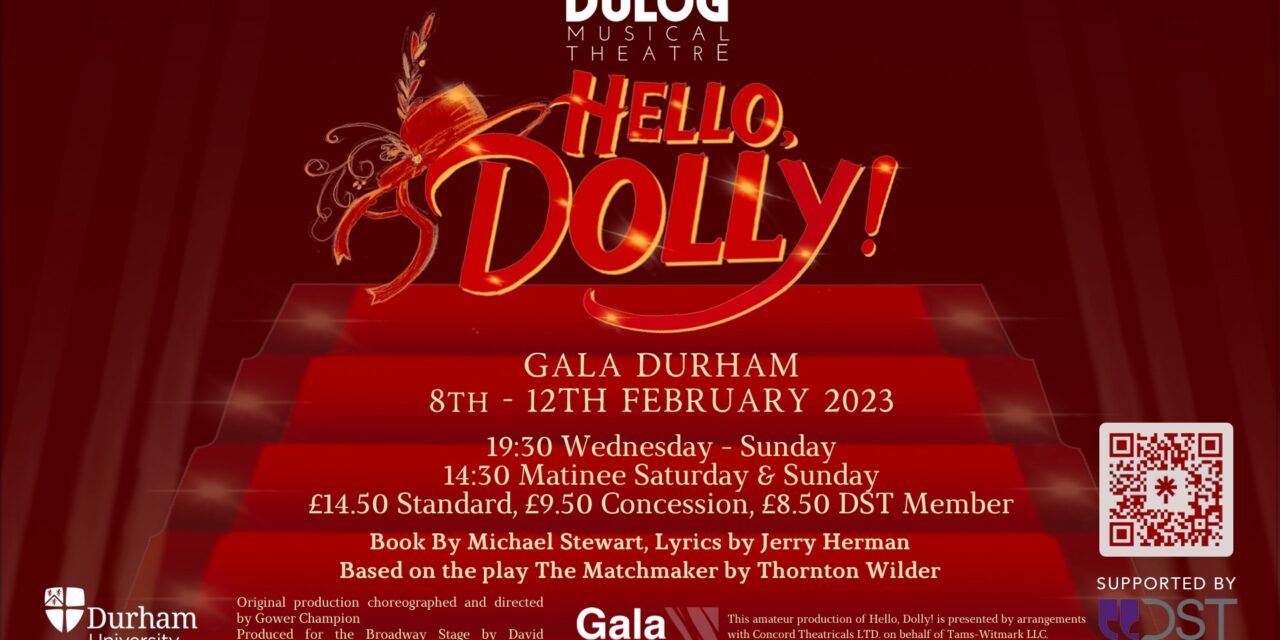 Did you know that there have been more standing ovations recorded post-covid than at any other point in theatrical history? Not a hint for future audiences, of course, merely an observation…

For the thirty actors, the twenty musicians, the fifteen crew members, and the uncountable team of creatives and contributors involved in Hello, Dolly!, taking theatre for granted is something we will never make the mistake of doing again. Standing ovations have increased because theatre has never been appreciated in quite this way. As audiences flock back to the West End and Broadway, our not-so-little drama scene in Durham may seem, to the outside world, like an aside, but to us it’s anything but. I want Hello, Dolly! to be a celebration of what we have found in each other and in theatre, and we hope that comes across in our production. I have had the delight of co-directing with the wonderful Jennifer Lafferty, balancing her appreciation of naturalism and onstage truth with my love of movement and thematic bookending, and I hope that the combination of our skillsets will create the most wholistic production possible.

But why a golden age musical? The answer, thankfully, is more than just “tradition”. Of course, it’s difficult to resist a little glamour and glitz, a little romanticism, a touch of escapism. But Hello, Dolly!, to me at least, is about going back to our theatrical roots and bringing the pure, unbridled joy of classic musical theatre to the darkened gloominess of a Durham February. Hello, Dolly! is just about as iconic as you can get when it comes to musical theatre titans. There is nostalgia to be found in its historicity and beauty to be found in its message of optimism. There is but one thing I hope for the audience: that they leave with a snippet of romanticism to bring back to the 21st century. The world outside the theatre may not be as rose-tinted, but that doesn’t mean we can’t carry a touch of theatricality along with us…

My musical directorial debut being a Gala production was not what I thought was in the cards for me but it has been an incredible honour.

As a director with largely contemporary text experience, me directing Gala seemed perhaps a little confusing to many. In my opinion, however, the foundational basis from which I work for directing plays, directly applies to golden age musicals. In Hello, Dolly!, the dated themes and concepts surrounding marriage and women’s role in society simply need a contemporary take to make them relevant today. By using recontextualisation techniques in rehearsals and choosing characters to be ‘in’ on the joke hopefully enables the audience to accept the plot in a far more relatable and enjoyable way. Additionally, I am well aware in musicals the choreography and singing tends to take priority over acting. I understand this is only natural when faced with a triple threat production you must prioritise what will be the most difficult to perfect! It has been an honour, however, to use my passion for acting to bring this wonderful facet of musical theatre back to the forefront of people’s minds and hopefully yield a more believable production.

Furthermore, navigating a co-directorship was a task I thought would be more difficult than it was. I have had the most joyous experience collaborating with Alexandra Hart on Hello, Dolly!. With Hart’s dance background and my acting background, we were able to tackle rehearsals in a complimentary way with Hart leading blocking and thematic elements of the production and myself taking on the more intention based acting elements of the production. Being able to share the directorial load alleviated much potential stress but also meant that we were each able to prioritise certain production elements to ensure no stone was left unturned.

Hello Dolly! is performing at the Gala Theatre from the 8th-12th February