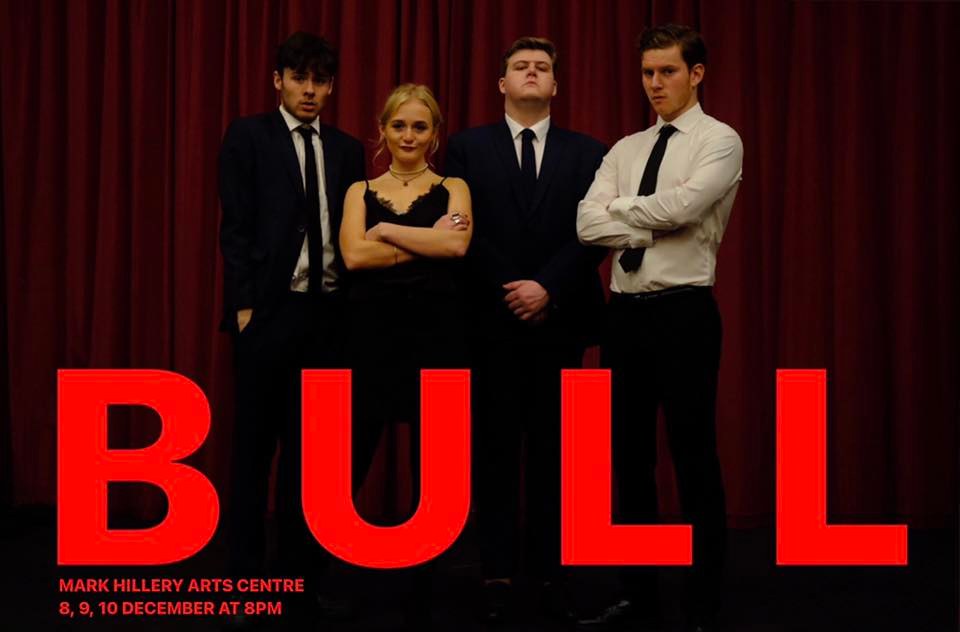 “Bull will be riveting, uncomfortable and disturbingly captivating”

Bull is a razor-sharp, vicious dark comedy. In a set-up which echoes that of The Apprentice, we watch three characters, Isobel, Tony and Thomas, as they fight for two jobs. One of them must go.

As this play unfolds, we witness a masterclass in collusion. Deceit and malice are ubiquitous throughout, making it hard to latch onto what to believe or not. Mike Bartlett skillfully interweaves every cutthroat tactic used in office politics to create a dog-eat-dog ethos which we somehow can’t help but be entertained by. For many people, however, the world Bartlett invites us into is actually a stark reality: a workplace in which themes of bullying, gaslighting and intimidation are inescapable.

At the heart of this play is toxic dialogue, heartless characters fuelled by ambition, and a ruthless workplace environment. It is thrilling to simply read it, let alone watch it progress in rehearsals and transform into a 55-minute performance! The reason I wanted to direct it is because the writing is so naturalistic, which, in turn, forces the acting to be naturalistic too. Moreover, there are absolutely no stage directions, meaning you have the freedom to go in whatever direction you want; there’s nothing – other than the dialogue – telling you what to do. On one condition: it must feel real, real enough for the audience to believe what they are watching and get carried away in it.

However, in order to successfully achieve the galvanizing tension required to pull this play off, not only was it important to work on pace, blocking and text analysis, but character work was essential. It has been particularly crucial in this case because lies – or rather bullshit – are interspersed throughout the script. Moreover, each character in Bull is inherently flawed. For the actors to shine, therefore, it was vital to understand the what and the why behind everything said. For this reason, I guess I should probably apologise to the cast for just how pernickety I have been at points with direction… but it was by focusing on what may have seemed like the smallest details that we were all forced to read inbetween the lines. A huge thank you must go to Charlie Howe (Assistant Director) who thankfully shared my vision from the start, aided me with the precision required in staging a show like this, and always has a useful suggestion up his sleeve when you most need it. In addition to this, I must say thank you to Lamesha Ruddock (Stage Manager), Ellie Fidler (Producer), Hidayat Malik (Technical Director), without whom this play would not be possible.

Now onto the actors, who, it’s safe to say, have – and continue to – astound me by how masterfully they seem to inhabit their characters, so much so that sometimes I forget I am watching a play…

Kit Redding as Thomas becomes the metaphorical bull. From the moment the audience files in, he is already onstage, biting his fingernails, nervously clicking his fingers, immediately revealing his character to be the lesser candidate in this fight for survival. Anna Birakos as Isobel, the ‘bitch’, and Tom Cain as Tony, the ‘sheer muscular wanker’, transform into deceitful, innately evil adversaries. Figuratively speaking, they are the matadors, and with their provocations, they manage to belittle Thomas in every possible way they can find. Is that something on your face? You didn’t bring your sales figures? Why didn’t you wear your best suit? What did your father do? The two incessantly provoke him until Thomas has no choice but to let them twist the knife in his back. Even as he sweats and lashes out, Isobel and Tony seem all the more contained and in control. Despite his increasingly desperate reactions to their goading, audience members are invited to see this gradually twisted, defeated character through the eyes of his rivals. This is all the more evident when Thomas Bracewell’s Carter comes onstage as their unforgiving, intimidating boss. At the end of the play we are left thinking: Is there something on his face? Why didn’t he wear his best suit? Is he strangely proportioned?

Staging the play at Collingwood’s Mark Hillery Arts Centre seemed like the right decision from day one. Nowhere else in Durham can you create such an effective black box theatre in the round, and I cannot thank Joe Elliott and Michael Crilly enough for making it possible. The decision to have the audience standing around the stage in an almost ringside formation means that the production is able to echo the ambience created at a boxing arena or a wrestling stadium. In such venues, spectators become voyeurs, complicit in their observation of the aggression taking place before them, and this play accentuates those feelings as we watch this brutal, metaphorical bullfight unfold. It also gives the audience no choice but to give a standing ovation at the end!

The more I think about this play and this production, the more fascinated I am by just how much nasty characters seem to resonate with audiences on a subconscious level. We don’t necessarily crave a connection with them, but we are horribly delighted with their immorality; every single malicious comment provokes a reaction from us whether we are aware of it or not. In this dark comedy in particular, you are almost urging each character on in your mind, secretly intrigued to see how far they can go with their reactions, merciless banter and goading.

Bull will be riveting, uncomfortable and disturbingly captivating. Rest assured, you will definitely be entertained. You will definitely laugh. You just might not like yourself very much for doing so when the play ends…

Bull is to be performed this Wednesday, Thursday and Friday (8th, 9th, 10th December) at 8pm.