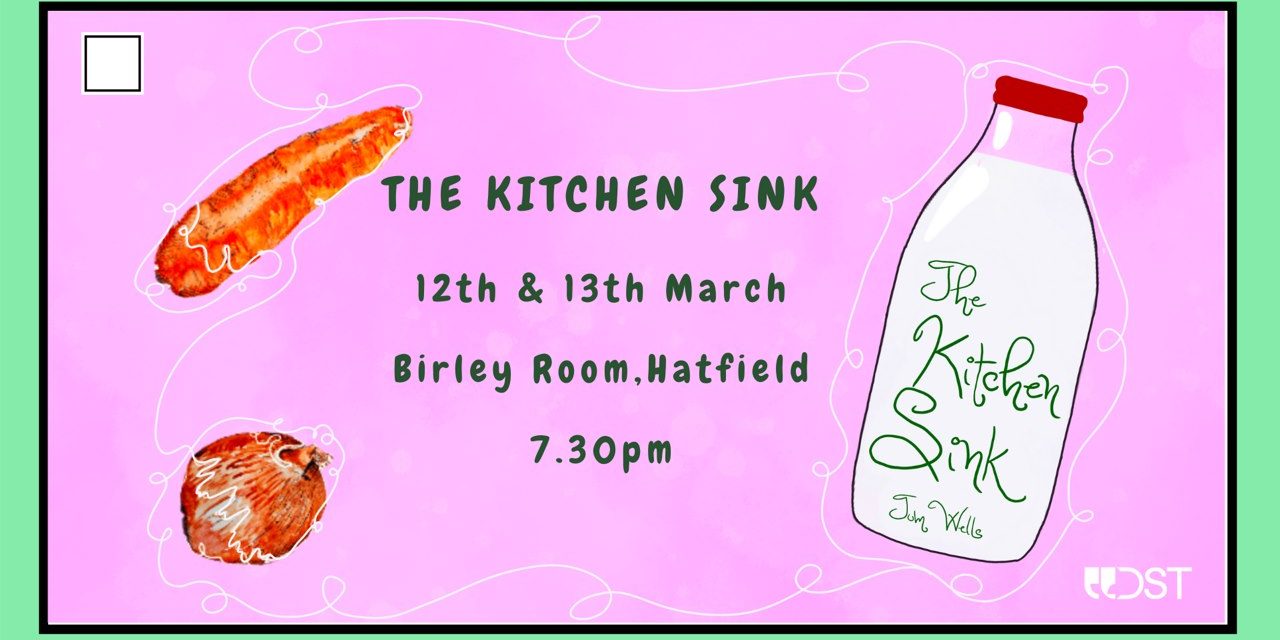 Mary Lord sets the scene for The Kitchen Sink by Tom Wells, a domestic family-based comedy from Fourth Wall Theatre.

Putting a modern spin on the kitchen sink drama genre of the 50s and 60s, Tom Wells’s The Kitchen Sink is a play all about love, life, family, dreams and changes. Set in a typical kitchen in a normal household of a family in Withernsea, Hull, the play depicts a year in the life of a family unit of individuals in their struggles with their own dreams and making adjustments to the changes happening around them. Full of heart, affection and Wells’ signature comic touch, we see how small changes in our lives can have a big impact.

I wanted to put on The Kitchen Sink I think mainly because I absolutely love Wells’s writing. Nothing is overstated but he manages to capture a beautifully British sense of humour in such a normal setting. I also knew that the acting talent available in Durham would be able to sustain such a fun but emotional play such as this. The student theatre scene has a tendency for people to put on heavy and thematically dark plays, none of which I’ve ever really connected with as a director or actor. So I wanted to do something a little more light-hearted. Not utterly pointless, it would do Wells’s script an injustice to describe it only as a comedy but, a play that is heart-warming and will make you laugh but that will also feel like a hug. Aiming for The Royle Family or Gavin and Stacey vibes, this play is an affectionate portrait of family life, with familiar themes and some hilariously quirky characters.

Getting the balance of comedy and the more tender moments in the script has been one that we have found interesting to explore, with regular discussions about what we should play for laughs and what we should leave. Wanting to evoke the sweetness that comes from the relationships in the play, we have worked hard on transition points and identifying moments of humour and moments of emotion and how the cast can collectively move from moment to moment. We have created a comfortably realistic sense of family life by not wanting to overplay any comedy and letting the script work its magic, the effect being a wonderful sense of amusing awkwardness. We have also discussed in detail, the motivation and stakes for each character and especially in the earlier rehearsals, we were regularly checking each actors’ justifications for their blocking or movement.  I am so grateful to my wonderful cast for their input in our rehearsal process. I have never liked just sitting and telling people where to go and what to do, but this time around I invited my cast to really get involved and give their opinions and criticism. I have found this so so helpful and it has been such a treat working with such a talented group of assistant directors (actors) who, may I suggest, are the most suited to their roles of any show ever.

Wells described his play as ‘a family, a year, a sink’ and there really is no need for it to be any more complicated than that. The cast are hilarious, the story is sweet and beautiful and the muscles on the producers for having to load a van or two with an entire kitchen for our set are worth coming to see if nothing else.  Have a seat while we pop the kettle on for an evening in the home of an ordinary family. Well, as ordinary as a Dolly Parton-loving, sushi at Christmas-eating, jiu-jitsu-fighting, sink-hammering, pink van-owning family can be.

The Kitchen Sink will play in the Birley Room, Hatfield College, on 12th and 13th March at 7:30pm.