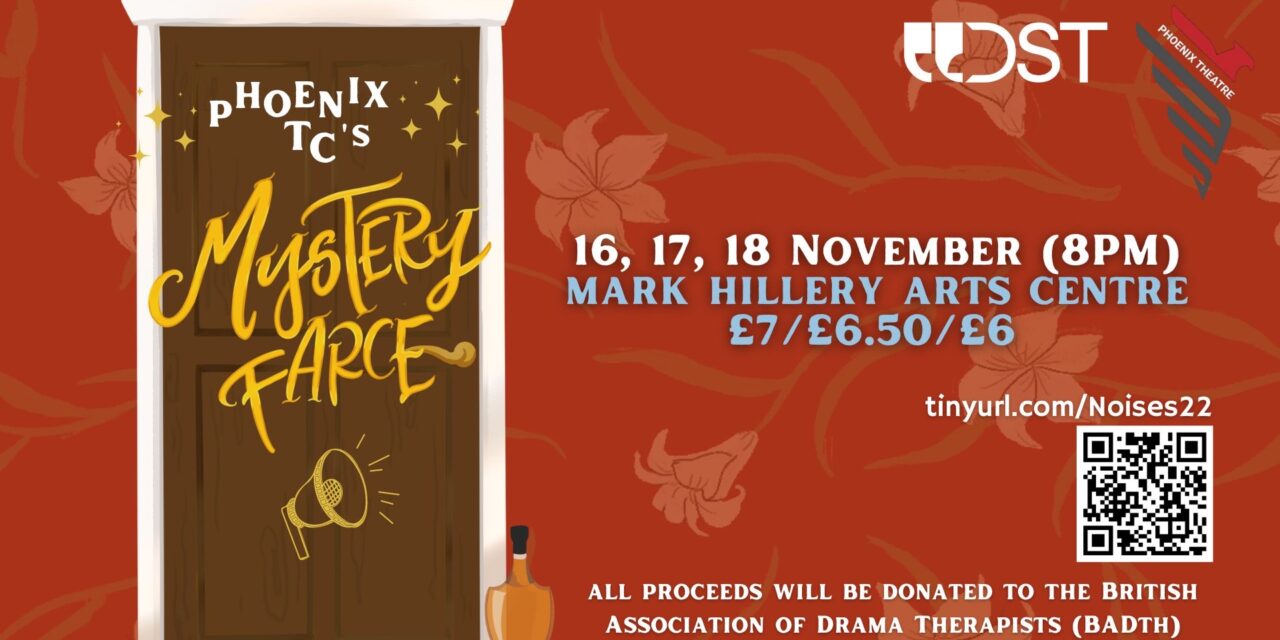 Everyone tells me Noises Off is my baby. And, they’re right. This play has been developing over the last nine months since our first set design meeting in March. It has been all-consuming, but never once have I regretted the decision to take this on as Noises Off is one of the most ingenious and hilarious plays I have ever encountered. What’s funnier than a play about a troop of terrible actors putting on a terrible play? The first act focuses on the late-night dress rehearsal of the play Nothing On. The second act reverses the set, and we watch their performance of the Nothing On a month later in Ashton-Under-Lyme, but from “backstage” – involving a forty-minute section of silent physical comedy. Act three returns the audience to the auditorium, as they watch the cast’s final performance of the Nothing On in Stockton-On-Tees, which is undoubtedly their worst, as squabbles makes their way onto stage, telephones snap from their cords, sardines fall on people’s heads, and actors fall down stairs.

As you can tell this play was no easy feat. Numerous challenges crept up during the production process (not only the ‘no advertising’ rights agreement!). The first of which was the set. The script demands a rotating up and downstairs, eight doors, a full-length window and an elaborate staircase. In March, our set design team came up with the brilliant idea of rather than rotating the set, we should simply move the audience to the other side of the set instead. This stimulated our immersive plan, how we would take the audience on a journey with the troop from their dress rehearsal to their final performance.

It was only two months ago when our brilliant cast arrived on the scene. By which stage, the set had already been constructed, the majority of props had been bought and a full production and creative team had been assembled. I must commend the cast for their brilliant efforts with this play. It is no easy one, especially with line learning – each time the cast performs Nothing On the lines are similar, but not identical! Equally, I was stunned by how in just one week this talented group of people managed to memorise the forty minutes of backstage silent physical comedy, while also managing to time it perfectly with the on-stage lines. Rehearsals involved reading the stage directions, then getting the cast to walk through the motions, performing it to the on-stage dialogue and finally working on getting the timings right as in some sections the dialogue on stage was very short meaning the backstage action had to be very quick. The one-page section was then added to the previous page running them together. We then would complete the same process with the next page and so on until it had all been memorised. This was a long process, but one which everyone enjoyed as we counted down the pages to the end of the act.

Developing character was something we worked very hard on and one character we deliberated particularly over was Brooke. Despite her terrible acting as Vicki (her character in Nothing On), we wanted to create moments where nuance and expression could be added to her voice to avoid the delivery being monotonous. The most fun comes in act three when Brooke performs Vicki in an identical manner in acts one and three. We decided to keep her movements exactly the same to show her inflexibility and absent mindedness making for numerous comedic moments when she might be delivering a line or putting her arm around a fellow cast member who might not actually be there in act three as the play falls apart.

Freddy was another character we spent a lot of time considering. His wife had left him the day before the dress rehearsal, so we had to decide to what extent he was affected physically and vocally by that. A naturally inquisitive character, we decided on “switch points” in the script – moments where Freddy would become so determined to find out more information about his character (Philip) from the director, Lloyd, that his sadness would temporarily leave him during the rehearsal. We then measured the level of sadness through the other acts – deciding that for example in act two, the performance itself was a distraction for him.

I would like to use this note to pass on my immense thanks to the rest of the creative and production team. This team is one of the best I’ve ever had the privilege to work with. Special thanks must go to Rosie Haffenden for leading up the set-design team with Carrie Cheung and Katie Scott – what a brilliant job they have done designing and constructing such an elaborate set on a student theatre budget. Nine months of their hard work finally paid off when the doors were moved into the venue over the weekend. Without them, this show would not have been possible.

I also cannot end this note without thanking my assistant director, Emily. Such an amazing assistant director who has such a clear vision of every character in the play. She never ceases to come up with new innovative ideas and always is there to bounce off ideas and tell me when I haven’t made the right call. Our producer, Joyanne also deserves so much praise! She genuinely is the best producers anyone in the cast or crew could have asked for. So organised, came to every single rehearsal, and was always on hand throughout the entire process.

A little about Phoenix Theatre Company (belonging to Grey College), the exec of which I joined last year. Our drive has always been to encourage inclusivity on the theatre scene in Durham. Since February we have been running weekly commitment-and-experience-free drama sessions which have encouraged many new people to get involved in theatre. Sessions have covered themes such as character building, spontaneous improvision, vocal technique – and our most popular (apart from the May exam-stress buster session), four weekly sessions based on Peter Shaffer’s Black Comedy. We have equally strived to create new opportunities and allow people to learn or develop new skills in theatre with Noises Off by appointing two shadow stage managers and one shadow production manager. It is with this in mind that we are running the raffle during the show to raise money for the charity BADTH, which aims to increase the accessibility of drama as a mean of therapy. If you come and watch, do buy a raffle ticket!

Directing Noises Off has been a lot of fun! The whole cast, creative and production team are such incredibly talented, amazing people and it has been such an immense privilege to work with them all. I really hope we manage to all work together again in the future. And on that note, I shall put down my pen and hand it over to Lloyd – the real director of the show!

By Ben Cawood, director of Noises Off