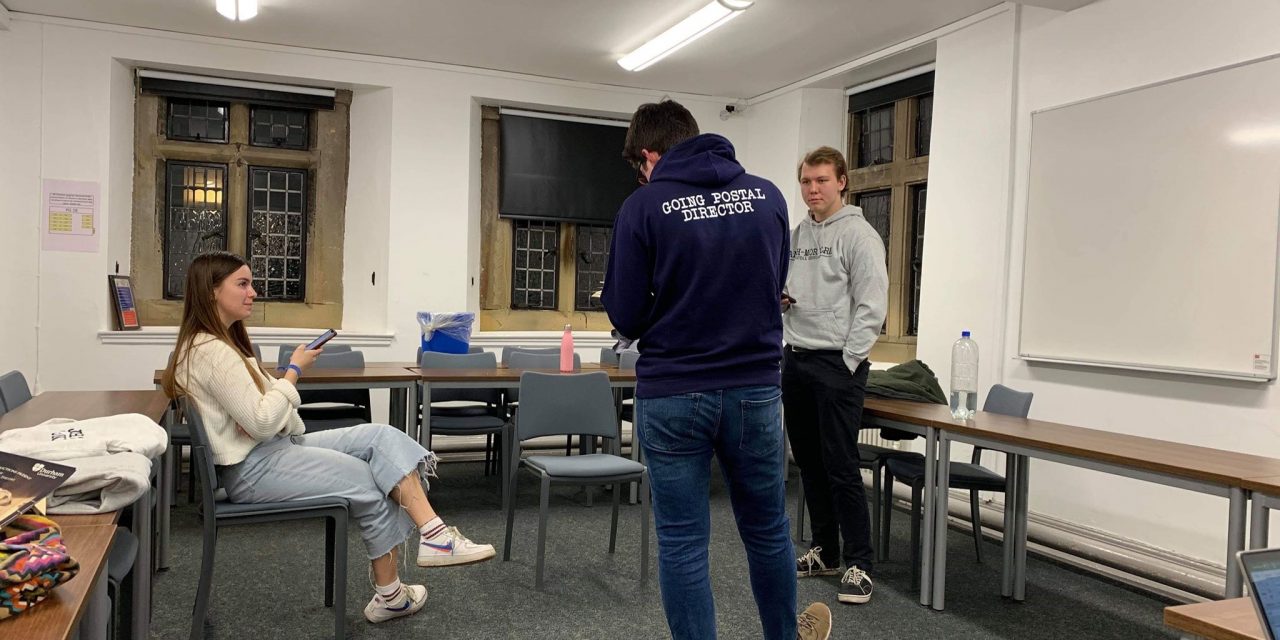 Going Postal is a story of redemption. Sort of. This is a Discworld story after all, and in Discworld nothing is simple. This is a world in the shape of a disc, balanced atop four giant elephants, which themselves are stood on the back of the Giant Star Turtle, Great A’Tuin. Makes perfect sense, I hear you say.

Our protagonist in this weird and wacky world, Moist von Lipwig (an unfortunate name, I know), is a very small and somewhat forgettable cog in the machine that is Discworld. Regardless of this he is a man with large responsibilities. Responsibilities that are somewhat beyond his abilities as a con-man, fraudster and social-deviant. So, can a man who has killed 2338 people… sorry, 2.338 people (and killed them indirectly I would like to add) find redemption by taking on the thankless, frighteningly bureaucratic and deadly task of restarting the Ankh-Morpork post office?

To find out, come see the show! I mean answering that plainly rhetorical question would be almost as ridiculous as the conspiracy theory that the Disc is round. It’s FLAT. Get over it.

Terry Pratchett was a great lover of farce and satire. So in this show, adapted by Stephen Briggs from Pratchett’s 2004 novel, you will notice many similarities to our world. Or be it, rather silly similarities. As well as this Pratchett weaves some very serious social commentary into his work, including discussions on race and gender identity through the presence of Golems, creatures literally straight out of Jewish mythology. Adora Belle Dearheart’s actions throughout the play – including threatening Moist with grievous bodily harm multiple times – present a vital commentary on gender roles in a play that only features a handful of female characters. The board of the Grand Trunk Company and its murderous CEO Reacher Gilt are guilty of corporate greed, corporate murder and then actual murder. Such a  presentation of bankers by Pratchett as greedy, pompous well dressed con-men is, in many ways, serendipitous as this story was published a full four years before the Financial Crash. As well as all of this Going Postal is part of Pratchett’s wider discussion on the morality of “benevolent” dictatorship, through Lord Vetinari. A member of the Assassins Guild, Lord “V” as he’s know to his friends (though he doesn’t have any friends), insists he is not a tyrant… He just happens to be the one in charge of everything. There’s a difference.

This ultimately, then, will be a play that makes you think, then laugh, then maybe think a little bit and then laugh some more. The true magic of Discworld is not the escapism it offers, but its ability to make us take a long hard look at our own world and realise how truly ridiculous it all is.

With that taken care of the final thing to say is: come, watch and judge for yourself! Absolutely everyone regardless of Discworld knowledge is welcome, and all will take something away from the performance. And if you’re still deeply confused by the end there might just be a cat and some educated rodents walking around, who would be more than happy to engage you in a thrilling dialogue about the more important theatrical themes of the play.

Profits from the show will be going to the Orangutan Foundation.

Going Postal will be performing in the Assembly Rooms Theatre on the 20th, 21st and 22nd of February with a matinee performance on the 22nd.