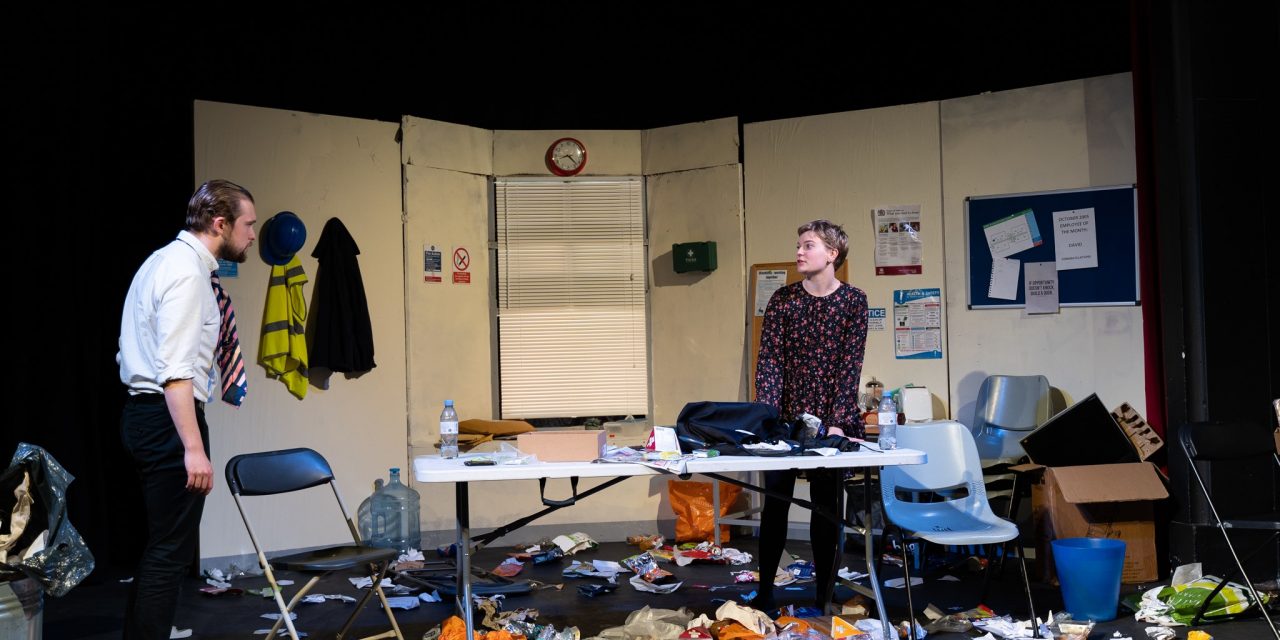 John Duffett offers insight into his favourite play, Blackbird, a complex story of love and morality.

Set 15 years after their last encounter, Una holds Ray’s most protected secret and tracks him down in his workplace, looking for the answers she’s searched for her entire life. In the following 70 minutes, the trash-laden office space becomes a battlefield as the distant past is recovered and rears its ugly head after half a lifetime of anticipation.

When I first encountered this play, I was at a strange moment in my life. I was in a state of limbo and uncertainty. I felt nothing new could excite me. I feared I had already felt everything I was ever going to feel – until I found Blackbird. I hurriedly finished it in one sitting, and by its end, I felt like I had been mortally wounded. It was the first time in so long I had felt excited; I felt alive. For whatever reason, on that day the words leapt off the page and became much more than just a play: to me it was real, as if I just witnessed this story happening in front of me. At that moment, I knew I could not be the only one to have this experience.

The author David Harrower once wrote “I distrust statements”, which is the key to understanding this extraordinary play. It would be a mistake to see this production as being pure conflict; the viewer must never take everything they see at face value. In reality, every statement we make can be undercut and examined to find its true meaning, and this is more relevant than ever in Blackbird. Both Ray and Una struggle with telling the truth. The stories they tell each other and themselves are constructed to avoid confronting who they truly are and how they genuinely feel towards each other. It is for you to decide what you think is the truth.

Blackbird violently tears away at the day to day façade Ray and Una have put on for 15 years. Both Ray and Una have varying layers of emotion and intention that are slowly unravelled and exposed to the audience throughout the duration of the show. As the story unfolds and the depths of their emotions are laid bare, we are unwittily compelled to act as witnesses to their most intimate moments.

Blackbird does not provide answers, but rather it poses unsettling questions to the audience that they’ve never had to consider before. It does not seek to put your mind at ease but rather challenge your preconceived notions of love and morality. It does not make the audience laugh or cry, but it forces them to watch and not look away as two lives are crudely dissected in front of them.

I have been incredibly lucky to have the wonderful cast of Daisy Hargreaves and Ben Willows, along with my Assistant Director Charlie Barnett, who have stayed on for seven months since the play began and have helped bring it to life. Despite the challenges we have met, they have surmounted them all, and so I am incredibly thankful for the dedication they have shown on and off the stage. The final product we have created is a raw, unrestrained, and powerful performance, that gives a nuanced insight into the complexities of a relationship so alien to popular entertainment.

Blackbird is about love, morality, truth, the past and so much more. If you watch very closely there is a lot to gain from Blackbird, and I am incredibly excited for you all to experience this monumental play; I hope it has the same profane effect on you that it had on me all those years ago.

The pre-recorded performance of Suffragette Theatre Company’s Blackbird will be available to stream online from 7:30 pm on Friday 23rd October until the end of Saturday 24th October. Tickets are available to purchase on the DST website.