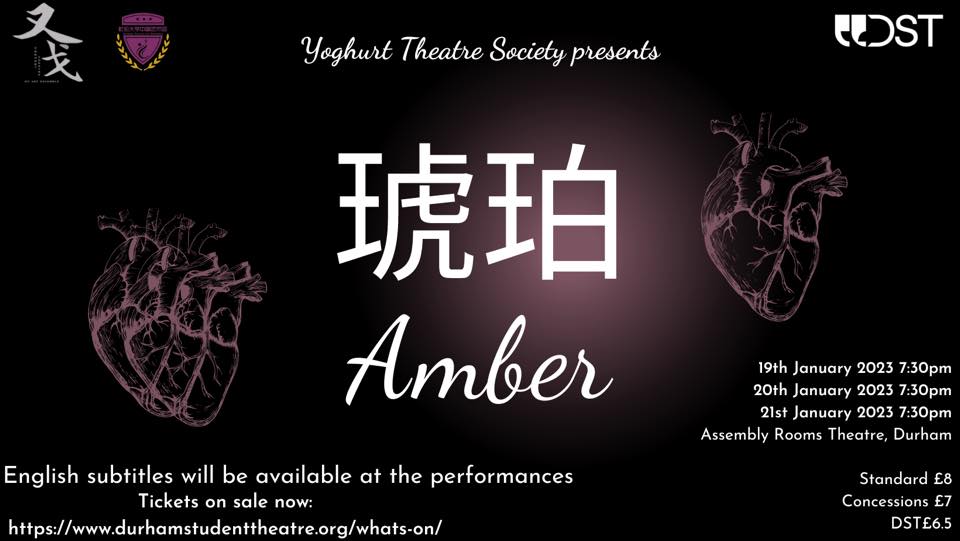 When I first read Liao Yimei’s trilogy, I did not like it. Her vision of romance, of tragedy, of madness are something that are heavily influenced by the distorted, toxic and misogynistic culture in contemporary China. In Rhinoceros in Love, her most celebrated work, she ended the show with killing the Rhinoceros (yeah the actual animal in the script though no animal is harmed in the performances) as an act of mad, romantic love, a taste of artsy that designs to aesthetically impress the audience. Her obvious tendency to favour abusive young men, to romanticise manipulative relationships, to stereotype women in general, are something that I find deeply problematic.

So why do you come to watch Amber then? The Durham’s first Mandarin show is a mild clickbait. The language of the show might be the reason you watch it. Yet it is not the reason for you to like it. I worked on Amber to present my mockery to masculinity and patriarchy. It is a show of sarcasm to heteronormativity in celebrated works. The displaying of toxic masculinity from a group of cast that are mainly women. The patriarchal and misogynistic speech from a non-binary character. The sarcasm of a group of men objectifying and sexualising women. The women who live and strive within the toxic environment. The vulnerability of love. The uncovering of hypocrisy in oneself.

This team works hard to establish a stage that reminds our audience of contemporary Chinese society, both the people and the social environment. The overall vibe that best to be summarised as a cyber brothel. The red banners really recalled my traumatic teenage years. There will be more, if you watch the show carefully. What brings me the joy is the fact that most of our team members has never done any show before. Both the cast and prod team. It is challenging for all of us. Yet it is refreshing. It is great fun. Speaking Mandarin in AR is something unbelievable for me one year ago. And it is happening now.