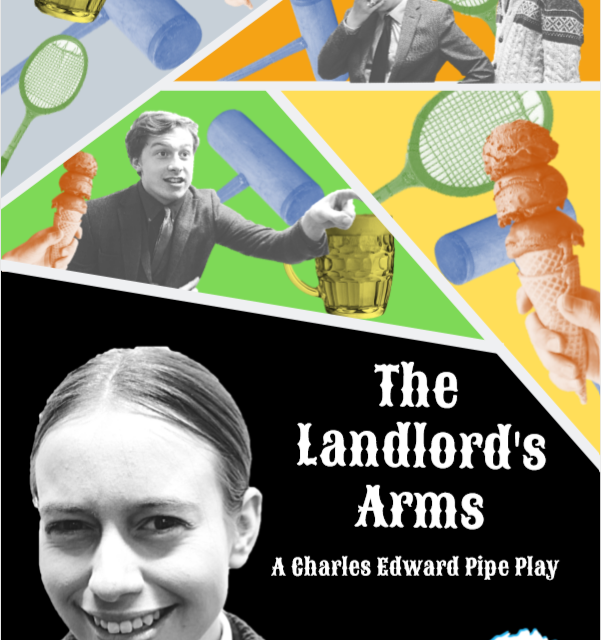 The Landlord’s Arms started life as a short one-scene play – effectively a sketch.  When it was received well at DDF Scratch Night 2019 I decided to write an extended version, rather than coming up with original ideas.  And so I begun work extending a perfectly good, self-contained comedy into a 55 minute play with a narrative and characters and foreshadowing and all the other things audiences expect from the theatre.

The original plan was dark, since, other than comedy sketches, all I knew how to write at the time was drama.  It ended with several murders and betrayals.  There was a sickening tonal shift which would have shocked audiences.  I would have smirked smugly as their laughter turned to tears, and as the fun energy from the start of the play shifted into the glum melancholy they would feel leaving the theatre.  “Fools!” I would think, “How ignorant of you to believe that you were going to have a good time!”

But when I looked back to the original script of the original version of The Landlord’s Arms I realised that I had lost sight of the essence of my creation.  What had started out as a pure, straightforward, fun comedy had devolved into a self indulgent and pretentious piece of *art*.

The Landlord’s Arms as it exists now, is funny, and that’s pretty much all it is.  Of course there is a plot (many elements of which carry over from the darker version), and characters, some of whom even grow and develop.  It would just be a series of sketches otherwise. I have simply stripped away the self-serving dramatic stuff, and replaced it with comedy. How very selfless of me, to write a comedy that will make the audience laugh.  You’re welcome.

The style – or rather styles – of comedy in this play are eclectic to say the least.  On a broad narrative level this is farce, full of miscommunication and misunderstanding.  Each scene has a healthy dose of situational comedy sprinkled in – what would happen if Character A had to do Task B at Location C?  Then there is the wordplay. The incessant non-stop wordplay.  The puns that made me groan as a I wrote them.  And, to make matters weirder, there is constant, but inconsistent, meta humour.  My hope is that, with so many different styles of comedy, each audience member will find something that is especially hilarious to them.  They say you can’t please everyone, but dammit I’m gonna try.

I have lots of comedic influences.  Here is a simple list of some of them: Monty Python; The Two Ronnies; Fawlty Towers; The Goes Wrong plays and The Comedy About A Bank Robbery; One Man Two Guvners; That Mitchell and Webb Look; etc, etc, etc.  The Landlord’s Arms has something inspired by each of them.

If you are looking for something deeper than just comedy, I’d suggest watching this play with toxic masculinity in mind.  Although I did not consciously set out to explore this theme, it managed to worm its way into the script.  The male characters – especially Johnny and Rodger, between whom the main conflict of the play emerges – are stubborn, proud, aggressive, possessive, and bad at communicating.  These traits often lead to problems, both for the characters themselves and for the other characters in the play.  Perhaps if I were to extend The Landlord’s Arms to a two-act play, I could explore this further.  Until then this is the best I can offer.

Something I knew throughout the whole process is that one writer alone cannot possibly think of everything that might be funny for any given moment.  That is why I deliberately left the script open for personal contributions from actors and directors.  As it so happens, I am directing this play, and have enjoyed working with my cast to experiment and improvise, and the result has been the creation of a play that is funnier than anything that I could have written by myself.  I hope you enjoy watching it as much as we enjoyed creating it.

The Landlord’s Arms is in General Programme 2 of the Durham Drama Festival 2020, playing at the Assembly Rooms Theatre on 5th, 6th and 8th February.