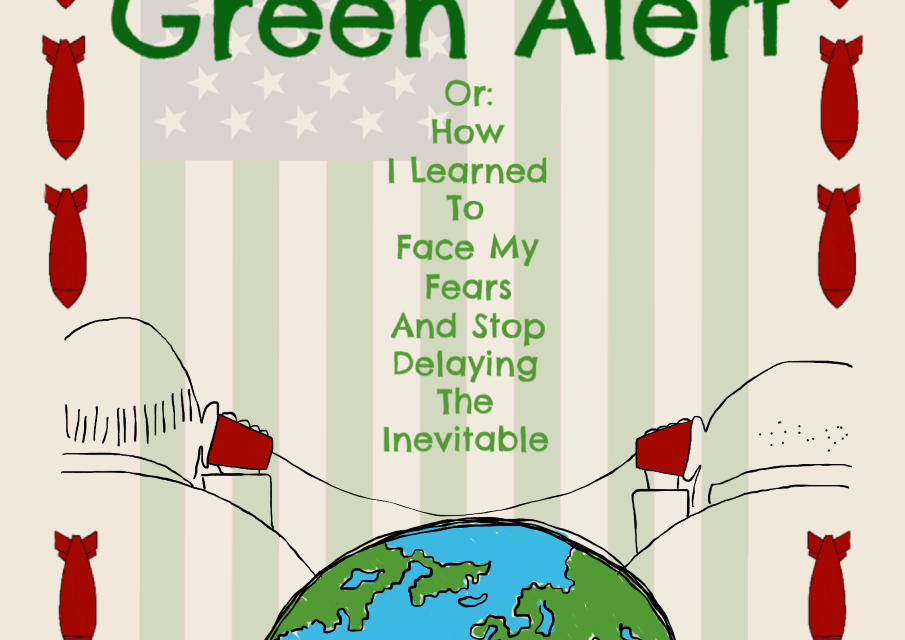 Green Alert wasn’t born out of a desire to write about the environment. Why bother? Basically everyone knows about it anyway so anyone who doesn’t care about it is probably never going to. In truth I’d given up hope that humanity could ever prevent a climate disaster. In my head I had already accepted that the death of the planet was going to happen. I ignored the climate problem, not because I didn’t believe in it, but because I believed that humanity was making it inevitable.

So why did I write Green Alert? I wanted to write a sitcom, even though I had no idea what to do with it once I’d written it. When thinking up episode ideas I looked for movies that I might be able to parody. Since Dr. Strangelove is my favourite film it was one of the first I considered. But how can you parody something that is already a parody of the cold war? You can’t. So I left it and moved on to other things.

Much later I saw a tweet that made everything click. I can’t remember it specifically but here’s the gist. ‘If we knew an asteroid was going to destroy the earth in 2050, we’d all be panicking about how to stop it, but we know that the climate is going to destroy the earth in 2050 and we’re not even really trying’. It’s funny. We treat the end of the world in completely different ways depending on where it might come from. That’s when the idea came. Dr. Strangelove is about the end of the world. Instead of a parody, I would use the same style and set up, but make it about something completely different. Dr. Strangelove was made during the cold war. It was dealing with the greatest threat to the planet at the time. My script would use the greatest threat to the planet now. Climate change.

So I applied the cold war logic of mutually assured destruction to the climate crisis. What if someone threatened to nuke the planet if we don’t cut our carbon emissions? How would politicians respond? This setup is a good vehicle for jokes. It highlights the absurdity of how we might ignore one kind apocalypse but not another. Maybe there is a point to writing about the environment after all.

In general, if you want to make someone care about a political issue, you don’t write about politicians, you write about the issue. I, Daniel Blake deals with the problems of the benefits system. It isn’t about politicians arguing the benefits system, it’s a story about how it effects real people you can sympathise with. It highlights a problem, bringing it to the attention of the audience.

If my script was to be about politicians arguing, it isn’t going to make people care. But that’s fine. The problem isn’t that people don’t care. Only nihilists and morons don’t care about the environment. The problem is that people don’t take it seriously enough because they care too much about other things. Things that don’t matter so much in the long run. Applying that same attitude to a nuclear attack makes it look ridiculous. I would present the audience with my pessimism towards their outlook in the hopes that it would make people look at themselves and motivate change.

It was at this point that I realised this story was too important to be an episode of a sitcom. I started writing it as a feature film until a friend pointed out that while at university, I should probably focus on projects that can be achieved at university. Hence, I adapted it into a play, entered it into DDF and here we are. I can always make the film later.

Writing Green Alert has changed me. In my head I no longer think of climate disaster as inevitable. I have taken more steps to reduce my carbon footprint. I’m more optimistic about the future. Sometimes I even think that the climate crisis will be solved before I am able to make Green Alert into a movie, rendering it irrelevant.

Green Alert is in General Programme 3 of the Durham Drama Festival 2020, playing at the Mark Hillery Arts Centre, Collingwood College, on 5th, 7th and 8th February.