A brand-new, student-written musical focusing on the infamous love triangle between Elizabeth I, her cousin Lettice Knollys and Robert Dudley. As the daughter of Anne Boleyn, Elizabeth knows how much love can go wrong, but when she is seduced by courtier Dudley, History asks her one question: how far must a woman go to win at a man’s game? 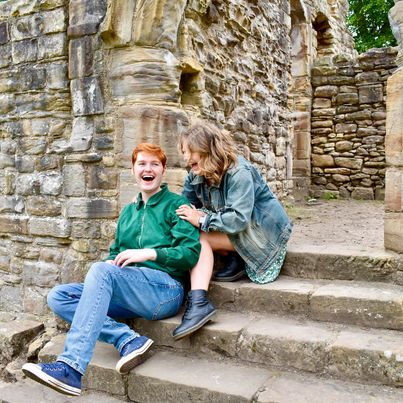 Whilst The Single Lady tells the story of Queen Elizabeth I and her court, its origins as a show come from a slightly different history. Way back in 2020 BC (Before Covid), having seen an advert on Facebook for a ‘medieval pop musical’ about the Wars of the Roses, a very eager history/musical theatre nerd found herself in the position of Director. Little did I imagine then where that would land me!

Unfortunately, that show, A Mother’s War, is still yet to grace the Durham stage, another victim of the relentless cancellations in theatre this year. But its entrance into my life brought with it a certain Will Drake, writer/musical director extraordinaire, a man with more talent than ought to be humanly possible. Working together on A Mother’s War as Director and MD respectively, we established a creative partnership that just seemed to work: we got each other’s references and were excited by the same things. After a summer of playing with online iterations of A Mother’s War and frequent conversations about an elusive ‘future project’ together, in Michaelmas term this year we finally bit the bullet and began to write what would eventually become ‘The Single Lady’.

The story began with a shared fascination with Elizabeth I. As a monarch, Elizabeth I is an enigma. Whilst she is synonymous with ideas of female power, she existed within a hierarchy built for men, often by relinquishing her own femininity. Probe further into historical accounts of her life and this ideal of her as ‘The Virgin Queen’ is problematised by her extensive relationships with some of her closest advisors, namely Robert Dudley – there is much speculation and conspiracy on the nature of this relationship, as ‘The Single Lady’ heavily implies. It is this speculation, and Elizabeth’s careful cultivation of her political image, that raise the show’s central theme: historiography.

Throughout, in the character of History himself, a caricatured personification of the privileged voices that get to dictate the stories of the people they oppress, the show attempts to illustrate history’s inability to ever recount the full truth, and its ultimate tendency to tell the truth that best fits its own political agenda. The show’s influences, deeply rooted in R&B musical traditions and LGBTQ+ pop culture, by contrast, pay heed to some of those voices that have been historically quieted, hoping that, like Elizabeth, they will find an authentic expression of themselves and their true intention and feelings throughout the musical. It’s a Rom Com with a deeper meaning: boy meets girl, girl happens to be the Queen, girl must weigh up if the boy is really worth losing her head over (in all sorts of ways), whilst the world must decide whose side of the affair it really believes.

Writing a musical with one of your favourite people is a wonderful experience. The show is just as much a letter to mine and Will’s relationship and understanding of each other as it is anything else. During March 2020-March 2021 I think Will and I saw each other in person a grand total of 3 times, meaning the main body of the musical was written during the hours we spent on Facetime and Zoom. Bizarrely this process seemed to work: we would call, come up with a concept, spend our days separately pondering this and then come back together and write. A shoutout must be given to our respective parents and housemates who had the joy of listening to both of us cackling into the early hours of the morning. The result is a show of which we are both incredibly proud and are having the most amazing time working on with our phenomenal cast – another group of people with more talent than seems fair!

Catch The Single Lady in the Assembly Rooms from 1st-3rd July. Tickets are available to purchase here. As for Lauren and Will, follow @breaktheruleproductions to stay tuned!